Beehive Split – How to Split a Hive

Beekeeping comes with a number of maintenance and management activities that beekeepers have to carry out periodically. The frequency of carrying out these activities varies by necessity, and by preference of individual beekeepers. Splitting a hive is one of these activities. It is mostly done to prevent swarming. Beekeepers seeking to expand their apiaries may also opt to split an existing hive instead of buying package bees to start a new hive. This article informs beekeepers on how to split a hive using the two major approved methods.

Advantages of Splitting a Hive

The advantages of splitting your beehive outnumber purchasing new bee colonies for your apiary. With your own established hive, you are sure of the genetics and temperament of bees. Some beehive splits result in more than 2 new hives with a bee colony in them. Benefits of splitting hives include:

When to Split a Beehive

Splitting a beehive gives you two honeybee colonies. You can say that you remain with an original colony that is reduced in size, and get a new colony of functional size. When you conduct a beehive inspection, you should look out for signs that a colony needs splitting. Indicators that you should split a colony are broadly categorized as those due to colony size and those due to the time of the year. They include overpopulation of honeybees in the beehive, appearance of queen bee cells in the beehive and too fast accumulation of honey and other beehive resources in the beehive. The purpose of splitting a hive is either to prevent natural swarming that is imminent, or to get a honeybee colony for a new beehive setup.

An overpopulation of honeybees in a beehive points to potential swarming. When the colony gets past a certain size that can fit comfortably in a beehive, it splits naturally in a process called swarming. The colony prepares a new queen bee and she leaves with a large number of honeybees to go establish another colony elsewhere. This causes slowed production in the beehive due to loss of worker bees. The beehive is also left vulnerable to attack due to fewer guard bees and less capability to fight off attackers.

Queen bee cells are large and easy to spot in the brood area of your beehive. They point to a desire of the colony to have a new queen. This may be due to the current queen bee being inadequate in some of her functions or because the colony has become too large and needs to split off to reduce the size of the original honey bee colony.

When you notice any of the above indicators, you should split the colony. It is better that you carry out a controlled split than wait for swarming to occur. If the honey bee colony swarms by itself, you may not have a chance to catch the splinter swarm and install it in a beehive in your apiary. When you carry out a beehive split yourself, you are able to install the splinter swarm in your apiary and, therefore, increase the number of honey bee colonies in your beekeeping operation.

There comes a time in the year when it is likely for honeybee colonies to swarm. In late spring season, most honeybee colonies are of large enough sizes and have collected sizeable amounts of beehive resources. Through summer, they increase in size and have a large population of bees in the colony. By the end of summer, most beehives are full of stored beehive resources if you have not harvested the stored resources progressively. Due to the large population of honeybees in the colony and abundance of stores resources, swarming is likely to take place. It can happen in late summer, through mid-autumn.

Honeybee colonies swarming in late autumn have little chance of surviving winter because they do not get enough time to draw comb, store honey and ensure they have enough bees to keep the colony warm through winter. You should, therefore, be on the lookout for signs of swarming when you conduct a beehive inspection in summer and autumn. Harvesting accumulated beehive products such as honey contributes to preventing swarming.

Things to Note Before Splitting a Hive

How to Split a Hive 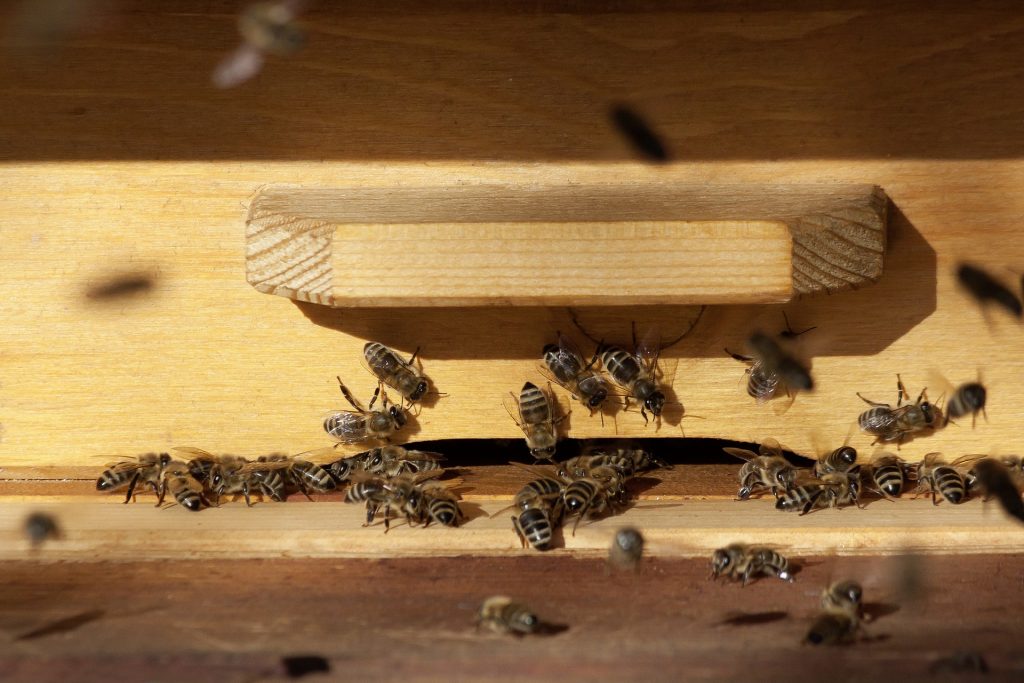 Splitting a hive will see you working with bees in close proximity. Your safety and protection from being stung should be a top priority for you. Beekeepers splitting a hive should make sure to have adequate protective clothing. Such clothing should include a beekeeping veil and beekeeping gloves.

Splitting a Hive to Prevent Swarming

Thriving bee colonies may outgrow beehives. This happens when the space in your beehive gets too small for your growing honeybee colony. Beekeepers have the option of adding more space to a beehive to accommodate the colony, or splitting it to have two bee colonies. An additional beehive is extra income. It expands your beekeeping empire and gives you valuable beekeeping experience. Both amateur and professional beekeepers can split a hive to prevent swarming.

After splitting your hive to prevent swarming, you may notice more activity in the old hive than the new one. This should not worry beekeepers. The new hive will get increasingly busy as the brood matures to young bees. The honey bees that were nursing the brood in your new hive turn into foragers. Freshly hatched young bees nurse the subsequent broods in the hive.

Beekeepers may sometimes not be willing or ready to split current beehives in their apiary. These beekeepers can still get bees for new hives by being on ‘swarming lists’. These are lists drawn up as a record of beekeepers that are in search of new swarms. You may indicate how many swarms you are interested in. Additionally, you may note down the preferred location of the new swarm you want. Local beekeeping clubs are a great avenue for beekeepers to meet, share ideas and register onto a swarming list. With luck, you will get all the swarms that you need. Beekeepers wishing to have more than one swarm may have to wait until each beekeeper in a swarm list has received at least one swarm. Additional swarms may then be shared out between beekeepers who want more than one swarm.

When is it too Late to Split a Hive? 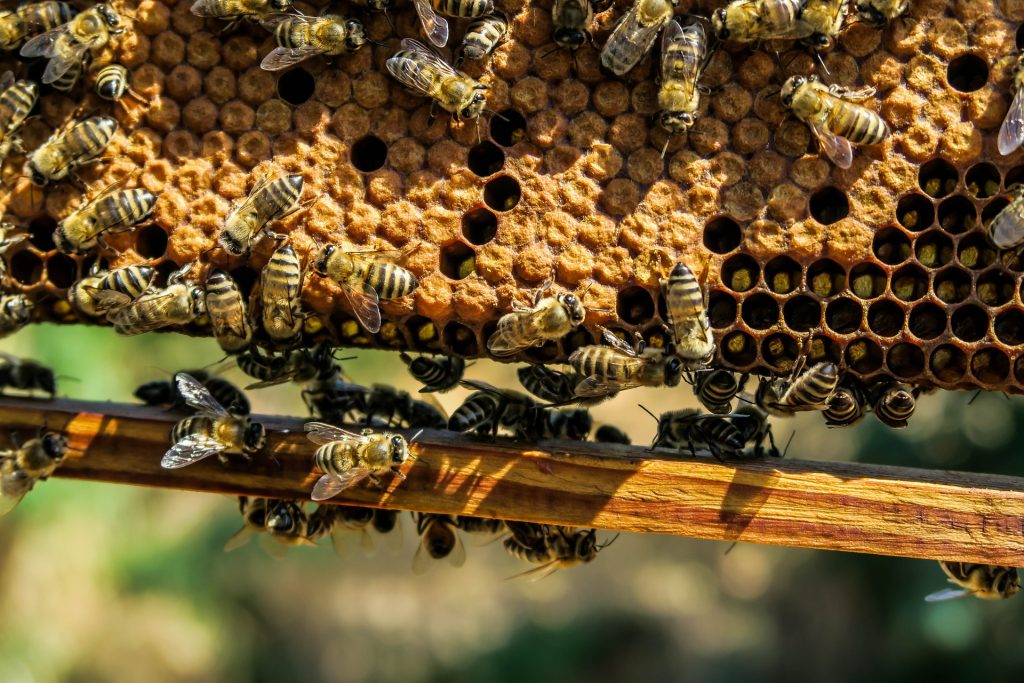 Splitting a hive for whatever reason is best done early in spring and summer. This allows the bees in both hives to settle in and build up food reserves. It additionally enables your honeybee colony to build up its number for higher chances of surviving winter. Beekeepers splitting a hive should do it on time to allow the bee colony at least 3 brood cycles before winter sets in. Splitting should be determined and guided by the excess resources that bees have.

Where beekeepers initiate a beehive split, they must take measures to ensure the process sis as natural as possible. Splitting a beehive in spring gives you better honey yield even with the split. Where honey production is not the focus of your beekeeping, you may carry out beehive splits in late summer or autumn. You may however not harvest any beehive products from a late split beehive until the following spring.

It is too late to split a hive past mid-fall. Winter too is not a good time to be doing beehive splits. Beekeepers that see the need to split a hive during these late seasons would be required to heavily feed their bees. Splitting a hive late in the year increases the rate at which bees in the colony die during winter.

Proponents of late hive splitting advance a number of reasons and benefits including saving money. In the northern hemisphere, late splitting improves the stock of bees in the region. Whatever time you are splitting your hive, provide adequate protection for the split hives. Small hive beetles and robber bees are the biggest threat after a hive split. Robbing may be done by bees from the split colonies or other bees near your hives. Entrance reduction is a great way to prevent robbing in newly split hives.

Bee colonies get too big for hives over time. Beekeepers not willing to add boxes must eventually split their beehives. It is good for both beginner and experienced beekeepers to know how to split a hive. By splitting a hive, beekeepers enjoy strong colonies with known histories and strong genetic qualities.