How to Build a Bee Swarm Trap – DIY Beekeeping

Swarming is a natural process of a hive splitting itself to create two colonies. It is a common occurrence whenever a colony gets too large. Beekeepers are able to catch swarming bees using swarm traps and then transfer the bees to beehives. It it is the natural way of acquiring bees, as opposed to purchasing a package from another beekeeper. This article guides you on how to build a bee swarm trap that can bring you a fresh set of bees for your apiary. When bees are swarming, they leave a hive with the old queen and up to 60% of the worker bees. Catching a full bee swarm is an exciting event for both amateur and professional beekeepers.

About the Bee Swarm Trap

Trapping a swarm has a number of advantages to beekeepers. It gives you new genetic diversity for your apiary and helps you start a new beehive. A bee swarm trap is also called a bait hive.

Beekeepers have the option of buying a swarm trap or building one themselves. There is fun in building a swarm trap, and you learn a lot too. You get a strong connection to the bees you catch. Additionally, you are sure that the swarm will do well in the beehive you will install them in. Using a trapped swarm to start a new beehive is preferred by some beekeepers. It is also cheaper than buying package bees. 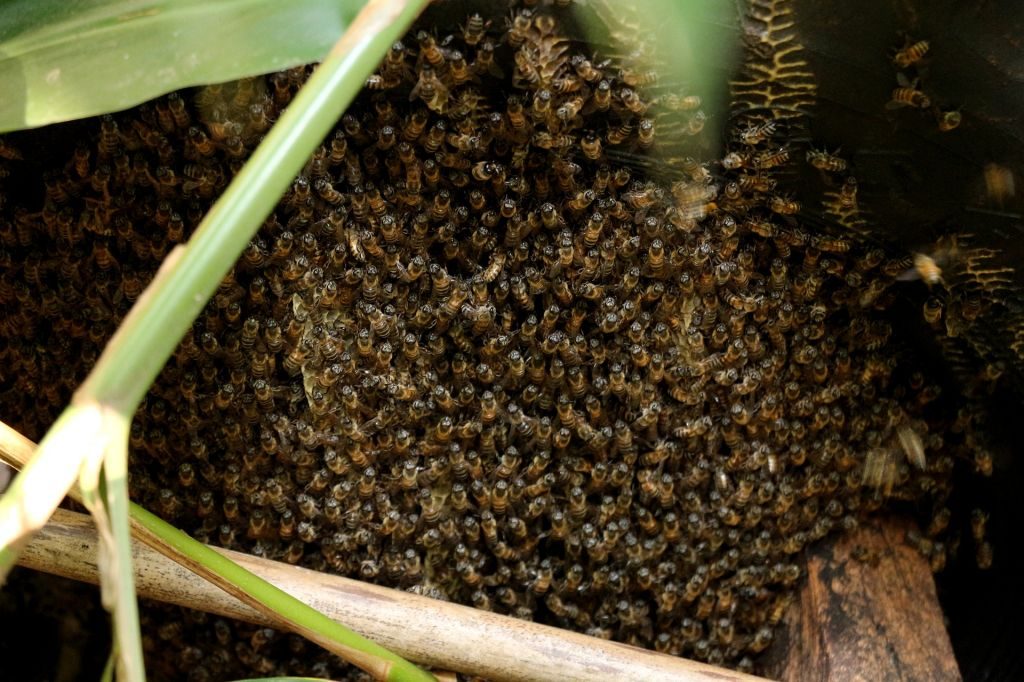 Based on their individual preferences, beekeepers may apply some lures to their bee swarm traps. Old honeycomb and beeswax are the natural scent lures you can use from an old beehive if you have one. Once you have built the bee swarm trap, you may use lemon grass oil as a lure to the trap. To use lemongrass oil as lure, soak a cotton swab with the oil and dab the trap’s entrance. You may then leave the swab inside the trap, preferably at the back for some time. Beekeepers have the option of using commercially sold slow-release tubes with lemongrass oil. Lemon grass lures work best for beginner beekeepers that do not have a source of beehive products to use as lures.

Materials, Tools and Equipment to Build a Bee Swarm Trap

The tools you need to build a swarm trap vary depending on the materials you will be using. A drill helps you make holes that you can later use for screws and nails. Pre-drilling holes is easy on the wooden parts. It prevents splitting, especially when you are using nails.

Dimensions of a Bee Swarm Trap

If it is your first time and you are learning how to build a bee swarm trap, keep in mind that you want the trap to be not less than 40 liters in capacity. Research has shown that bee swarm traps smaller than 40 liters are not favored by scout bees. The upper limit of the bee swarm trap volume should be 60 liters. The average 10-frame Langstroth beehive deep box is 43 liters in volume. The minimum dimensions of the bee swarm trap should be 9 inches in height, 10 inches in width and 20 inches in length. However, you may have the dimensions in any other preferred order. Some beekeepers prefer a swarm trap that is taller than it is wide. However, you must stick to the proper dimensions of length and width if you are going to be using standard beehive frames in the swarm trap.

With all your materials, tools and equipment ready, you are set to start building the bee swarm trap. Keep in mind that your desired outcome is a tightly sealed box with a single entrance that can provide shelter to the honey bees for some time.

Lay out the materials on the floor or work table – whether you’re using wood or cardboard. You’re going to need 6 different pieces – 4 for the sides, 1 for the bottom, and 1 for the top.

Measure and cut two pieces of the material 20 inches long and 9 inches wide. These will be used for the sides.

Measure and another two pieces 10 inches long and 9 inches wide. These will be used for the front and back.

Measure and another two pieces 20 inches long and 10 inches wide. These will be used for the top cover and bottom board.

Bear in mind that the top will need to be removable and water-tight and able to keep the hive moisture free. As such, attached the galvanized metal sheet to the top cover. Cut to the same length and width.

Utilizing the drill, nails or screws, attached the side, front and back boards to the bottom board.

Add the top using screws and make sure they are tight enough. It is advisable that you use screws forbthe top instead of nails. Screws are easy to take off using a screwdriver. They do not require hitting that produces noise. If you take a hammer to the bee swarm trap, you will aggravate the bees in it with the noise you make. Screwing the top on allows you to use the trap many times. Nails tend to split wood, especially when they are repeatedly nailed into the wood and plucked out.

Cut out the entrance to the front board. On the entrance hole, a nail is useful to prevent birds and other predators from entering the swarm trap. A one inch square or round entrance works great for most bee swarm traps. Some ventilation is also appropriate, so factor that in.

Think about the attachment of the bee swarm trap to wherever you will be placing it. A projecting piece of wood allows you to hang the trap on a nail up a tree. Beekeepers may prefer to use wires to hang their bee traps. Others strap it to a tree using various methods. Your preferred method of attachment should be strong and easy to undo. You do not want to struggle at detaching the trap while it is full of bees.

A bee swarm trap built in the Langstroth beehive design may be left empty or with frames. An empty trap will see the bees making honeycomb onto the sides of the box. If you place frames inside the trap, the bees will draw comb on the frames. When it is time to move the swarm into another beehive, you only need to move the frames and the bees continue with their work on the already familiar frames. If you do not have frames in the bee swarm trap, the bees have to start over after you transfer them to a beehive. Beekeepers that may go a few weeks or more between inspections of their swarm traps are strongly advised to have at least 5 frames in it.

The location of the bee swarm trap is very important. You should place it in a place where you can easily see it from a distance. A swarm trap is best hang on a tree. You may paint it to camouflage it within the foliage of the tree. Use light-colored paint to avoid overheating the swarm trap. Some beekeepers prefer to place their traps with the entrance facing a specific direction.

Bees will readily enter any suitable swarm trap regardless of the compass direction that the entrance is facing. The height at which you hang the bee swarm trap determines how easily you can reach it. It also plays a role in security of the swarm trap. Predators easily reach low-hanging bee swarm traps. If you go too high, you will have problems accessing the swarm trap yourself. It will also be cumbersome for you bringing down the bee swarm trap when it catches a swarm.

It is great if you can see the swarm traps from a distance of 100 feet and observe if a swarm has entered or not. If you cannot see the swarm trap you have built and hang, neither can the bees. You might see a swarm of bees all over the swarm trap or hanging on it in a beard-like clump. This indicates that the bees have just arrived at the trap and will enter it gradually. Allow a day or two and the swarm will all be inside the swarm trap. Remember the locations where a swarm trap caught a swarm and use it more often as the location of your future swarm traps.

The empty bee swarm trap that you build should be weighed. If at any time you find the trap heavier than the empty weight, then you know a swarm is inside. Other indicators that a swarm has entered the bee swarm trap are bees arriving with pollen and entering the trap, or bee activity around the entrance of the swarm trap. Once you are sure you have bees inside the trap, you should transfer them to a beehive. Weigh the swarm trap with the bees inside it. The weight of the empty trap when subtracted from the weight of the box with bees in it gives you an approximation of the size of bee colony you have caught in the swarm trap.

Once you have built a swarm trap and hung it up on a tree, be sure to check on it frequently. It is best that beekeepers know about a successful bee swarm trap that has caught a bee swarm early. They can then prepare their beehive and move the swarm into it. If a swarm stays too long in your bee swarm trap, it begins settling in. This involves building comb, sealing crevices and cracks, and other hive activities. If you wait too long to move a swarm from your swarm trap, you will be causing the bee colony much more distress and negating the progress they may have made.

Wild bees are only caught by catching your own swarm. Beekeepers should know how to build a bee swarm trap if they hope to catch a swarm for their apiaries. Building a swarm trap is easy for both amateurs and professionals. It is not expensive and when done well it works wonders for your apiary. While building your bee swarm trap, be ready with a hive since you do not know how fast a swarm may get caught by the trap.

What do you think of this DIY guide? How do you suggest it could be improved, or how would you do it in your own way? Leave a comment below and let us know.