There are various methods available to beekeepers to control hive beetle populations in their beehives. Hive beetles can fly from a single hive and spread to the entire apiary, as such, they are a nuisance that must be swiftly dealt with. Trapping hive beetles is a common control method in beekeeping. It can be easily factored into your integrated pest management process. This article features the best hive beetle traps for beehives. They are useful for both beginner and experienced beekeepers finding their hives infested by these pests.

Hive beetles are an invasive pest in beekeeping and are generally categorized into small and large. The small hive beetle is the more popular one in beekeeping. It differs in size with the large hive beetle which requires herbivore feces and decomposing plant material as the favored environments to lay its eggs. These invasive beetles in hide in places not easily accessible by honeybees in a beehive. The beetles may get trapped by bees but can in fact trick worker bees into feeding them. Large hive beetles can be prevented from entering the hive by using entrances that are too small for them but big enough for honeybees.

Strong and healthy honeybee colonies are able to keep their beehive clear of hive beetles. Weak colonies however, are overwhelmed by the pests. The beekeeper must step in to help the hive if the colony is young or had swarming happen in its recent past. Other beekeeping management mispractices may also lead to the colony being weak, and it is the duty of the beekeeper must help the colony fight the hive beetle infestation.

When a hive beetle population becomes too large in a beehive, it can cause sudden, catastrophic problems. Hive beetles can cause the honeybees to abscond the beehive. The beetles defecate all over in the beehive (even in honey) and lead to the formation of yeast. This yeast leads to fermentation of honey and the bees leave for a less stressful environment.

Hive beetle traps go a long way in preventing the beekeeper from suffering losses in their beekeeping operation.

What to put in Hive Beetle Traps?

The Gimiton beetle traps are versatile traps that can be used in small hive beetle control. The traps are built in a double-compartment style using high quality plastic. They are to be placed in the upper sections of beehive boxes in a Langstroth setup. Most popularly, these hive beetle traps are hung over the top bars of your beehive frames. They are suitable for use with vegetable oil, mineral oil, hydrated lime and in dry capture. Dry capture is where you do not use any substance to hasten the death of hive beetles entering the traps.

The weight of these hive beetle traps is great for their placement. Each trap weighs 10 grams only and measures 15 x 2.6 inches. The traps are small and fit into the top of each beehive box easily. They can be used successfully to control hive beetles by both beginner and experienced beekeepers. The traps are colored white. 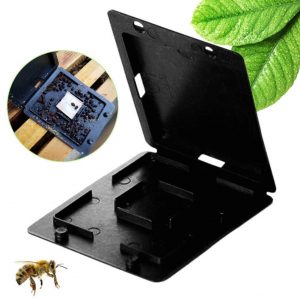 This beehive beetle fly trap is an insect capture case designed to catch hive beetles. It attracts the beetles and traps them. The trap is durable and can be used over a long time in your beehives. It can be emptied by opening it up. The trap is easy to open and close. It is safe for use around children, pets and honeybees. Trapped beetles are inside the trap, so honeybees cannot reach them. This hive beetle trap is colored black and comes in a pack of 1, 4 or 8. The pack of 8 are enough for use in many beehives and in any season when you see hive beetles invading your beehives.

The small hive beetle trap promises beekeepers excellent control of hive beetle infestations. The trap is harmless to bees since it does not contain or make use of any pesticides and poisons. It measures 90 x 76 x 7 millimeters. 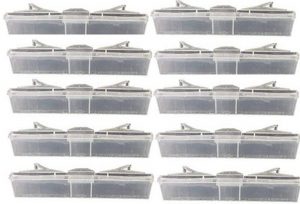 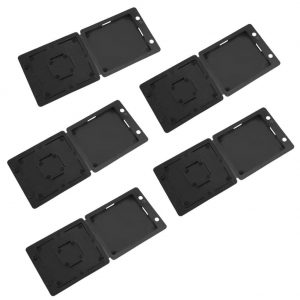 Frequent checking and emptying is required for these beehive beetle traps. They are reusable and last a long time. If you find the trap full of hive beetles, you have to empty it out. The traps are made using high quality plastic materials and show excellent craftsmanship. They do not fall apart or get damaged easily. They are colored black to mimic the dark spaces and small hidden spaces that hive beetles love to use for their shelter.

These beehive traps are not toxic to bees. They are food safe for use in beekeeping that produces beehive products for human consumption. An individual Fdit beehive beetle trap measures approximately 18.5 x 7.6 cm. It weighs 82 grams. The trap is made using high quality ABS plastic material. It works well with Langstroth beehive setups and effectively controls hive beetle populations. 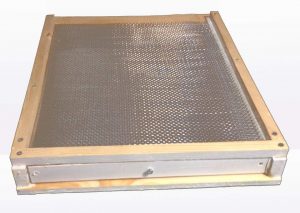 This integrated bottom board and hive beetle trap is made and sold by GreenBeehives. The manufacturer is a popular maker of beekeeping equipment and accessories. The GreenBeehives IPK screened bottom board & small hive beetle trap is made to fit 10-frame Langstroth beehives and promises to significantly lower the population of the pests in your beehive. The trap is made using aluminum and wood and boasts an effective working period of 2-3 days. It features a screen that allows the small hive beetles to fall through. Honeybees in your beehive however, cannot fall through the small-sized mesh of the aluminum screen.

Under the screen of this small hive beetle trap is an aluminum tray. The tray is used to hold oil that kills hive beetles. Any suitable oil including cooking oil and hive beetle oil can be used with this trap. The trap also catches hive mites as a bonus to the beekeeper. This small hive beetle trap does its job without introducing poisons or pesticides into your beehives. It works with 10-frame Langstroth beehives. It measures 19 7/8 x 16 ¼ inches. The trap is assembled with excellent craftsmanship and painted with a mildew-resistant exterior coat.

To use this trap, you must replace your current bottom board with it.  Its tray slides towards the back of the hive and bees cannot reach it to seal it with propolis. By covering the entire bottom of the beehive, this small hive beetle trap is very effective. 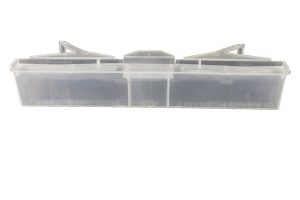 This small hive beetle trap is made in the USA. It is constructed in an effective design. Materials used to make this trap are also high quality. Good craftsmanship of the traps makes them popular as one-time small hive beetle control method among beekeepers. Beetle blaster traps are safe for your honeybee brood. They can be placed in the hive to control small hive beetles in any season including during honey-flow. 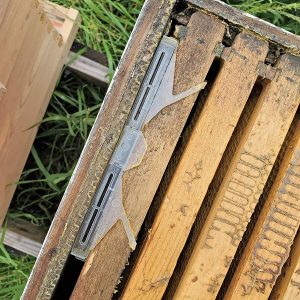 The Foxhound Bee Company traps for small hive beetles are sold in packs of 6. They are oil traps that are made to be enough for up to 3 beehives. The traps are built with the small spaces of Langstroth beehives in mind. They are slim and long to fit in beehive boxes. The traps are used on the top bars of Langstroth beehive boxes. They have clips to hold securely onto beehive frames. You may also use these hive beetle traps on other beehives if they can fit. The traps measure 6.2 x 2.8 x 2.1 inches and weigh 0.5 ounces per trap. These small hive beetle traps do not disturb or harm your honeybees.

Thin slots in the sides of the traps allow small hive beetles to enter the trap but not leave. At the same time, the oil in the traps quickly kills the trapped beetles. The compartments of this small hive beetle oil trap are easy to open up for cleaning and refilling of oil and bait. 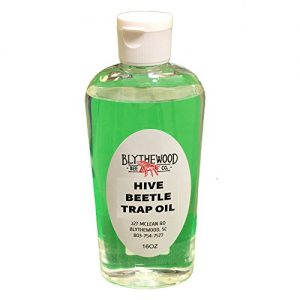 Blythewood Bee Company is a manufacturer of many beekeeping products. The company has many high quality products for beekeeping. It has stringent quality and safety standards that ensure its products are effective and durable. The Blythewood bee company hive beetle trap oil is used by beekeepers to top up their hive beetle traps. It is useful after cleaning traps or when setting new one. This oil comes in a transparent bottle. Each bottle of the oil contains 16 oz of the oil. It causes hive beetles in traps to drown and rids your apiary of small hive beetles.

Beekeepers can use this Blythewood Bee Company hive beetle trap oil in any hive beetle trap. The oil works great in any trap and can be used by both beginner and experienced beekeepers. Make sure to not spill the oil in your beehive.

In addition to trapping hive beetles, there are other methods of keeping the beetles in check. These include soil treatment and use of chemical treatments in the beehive. They have different modes of working and have differing levels of effectiveness. These methods help the beekeeper with clearing hive beetles from the hive or keeping them at manageable levels. Prevention of hive beetle infestations should be in your integrated pest management plan.

Maintain cleanliness in your beehives and the general area of the apiary to reduce its attractiveness to hive beetles. This includes cleaning the beehive and removing any debris that accumulates on the bottom board of your Langstroth beehive. The debris provides pupation grounds for hive beetles within the beehive. It works against some of the methods you may be using to control the hive beetles.

Soil treatment for control of hive beetles takes advantage of the beetle’s vulnerabilities in its lifecycle. Hive beetles love moist sandy soil. Beekeepers may locate their colonies in different types of soil. Treating the soil in your apiary with drenching pesticides prevents the larvae of the hive beetles from pupating. It kills the larvae in the soil. Use drenching chemicals that are not harmful to bees. Mowing down vegetation in the apiary is recommended before you treat the apiary soil with your pesticide. Water sources for bees and feeding stations should also be removed among other measures taken if the pesticide you use may be harmful to bees.

Beekeepers may use chemical control in the beehive on hive beetles. The chemical called Coumaphos is popular since it is registered and approved for in-hive use. It is sold under various brand names. You may consult agricultural authorities in your area to get the recommendations for your location. The beekeeper may be required to remove some beehive boxes from the stack. This leads to some beekeepers using chemical hive beetle control method after harvesting honey and on empty beehive boxes. Most treatment products for hive beetles must be left in place for extended time periods of more than a month. It is also recommended that you do not over-expose hive beetles to pesticides so they do not develop resistance.

Other beekeeping practices you can use to keep your beehives free of hive beetles include not tossing burr comb to the ground near your beehives, giving bees just enough space for effective patrolling and extracting honey from frames within a few days of removing the frames from the beehive.

Using hive beetle traps in beekeeping is an environment friendly way to manage the pests. Beekeepers can use these hive beetle traps to ensure healthier and stronger honeybee colonies. They reduce the need for the use of pesticides in getting rid of these pests. The traps can be placed in the hive before or after detection of hive beetles.

What you have ever used any of these hive beetle traps? Leave a comment below and let us know how effective is was for you. 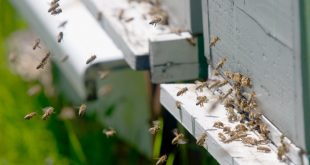 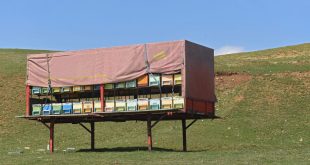 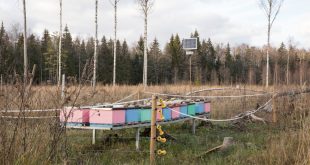