How Honeybees Maintain Temperature and Humidity in a Beehive

Beehives are microclimates with conditions that require careful control to remain at optimum levels at all times. Changes in beehive conditions affect the honeybees living there. They can turn harmful if left unchecked for long periods of time. Honeybees are always regulating the temperature and humidity of beehives. They employ various techniques to achieve nearly uniform temperatures in the hive. Of major consideration to honeybees, is the brood of the colony. Other parts of the beehive come second in priority when it comes to warming or cooling the beehive, as well as in humidity control. Read on to learn how honeybees maintain temperature and humidity in a beehive, and what you can do to help them.

The optimum humidity of the beehive is between 50% to 60%. Any drops or rises in humidity below or above the optimum of 60% poses a risk to honey bees, their eggs, honey production and impacts pests and parasite infestations among others.

What is the Humidity Inside a Beehive?

A beehive that has a healthy colony of honeybees has a humidity of 60% on average. The humidity at an instance of time may be higher or lower, depending on many different factors. Even then, the lowest that the humidity should be at is 50%. Additionally, the humidity rarely exceeds 65%. Honeybees use various methods to keep the humidity within a range of the mentioned lower limit, upper limit and best optimum level.

What is the Temperature Inside a Beehive?

Empty areas of the beehive that are not in current use, have been found to have temperatures as low as 520F (11.110C) during winter. This temperature gradient is natural in honeybee colonies. It is a result of the honeybees prioritizing keeping the brood warm over warming other areas of the beehive. The queen bee is also prioritized for warming by the colony. She may keep laying eggs or stop laying eggs during periods when temperatures are far outside the optimum of 950F (350C).

How Does Temperature Affect Honeybees?

How Does Humidity Affect Honeybees?

Humidity affects various aspects of the life of honeybees. Firstly, low humidity below 50% causes eggs of honeybees to desiccate. The eggs cannot hatch and may get damaged, thus resulting in a drop of the population of the affected colony.

Secondly, a humidity of 60% is best for the evaporation of water from nectar in the beehive. The nectar loses water until it has water content of 17% only as needed in honey. Ready honey is sealed in capped cells within honeycomb.

Thirdly, high humidity in the beehive raises the likelihood of fungi and molds growing in the beehive. These can turn harmful to honeybees and also lower the quality of beehive products.

How do Bees Maintain Beehive Temperature? 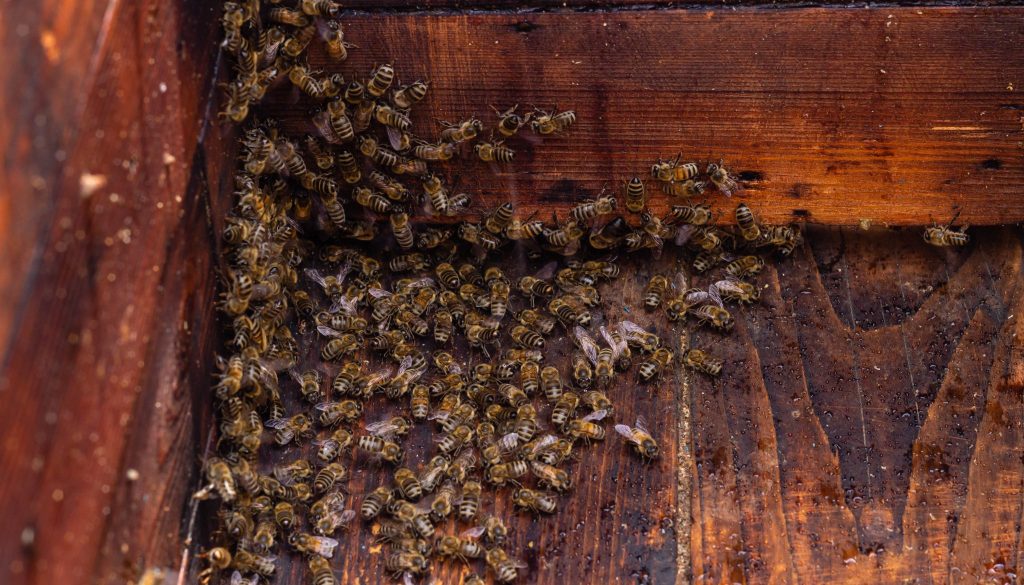 Any time that the beehive temperatures drop below 570F (13.90C), honeybees form a cluster. The bees group together inside the beehive to preserve heat by being tightly packed together. In the cluster, the bees generate heat by flexing the muscles of their thoraxes. Honeybee thorax muscles are also called flight muscles. Using this behavior, they raise the temperature at the center of the cluster to the low 90s0F (320C) which is favorable temperature for the queen to lay eggs, and for the brood to develop normally.

Additionally, honeybees seal up any beehive openings and cracks that they cannot adequately guard or which are allowing unwanted inflow of air from outside the beehive. They use propolis for this purpose.

How Honeybees Cool the Beehive

Temperatures of above 950F (350C) trigger honey bees to initiate cooling of the beehive. At first, some bees position themselves at the entrance of the beehive, at other available openings and throughout the beehive and fan their wings to create air currents that cool the beehive. If the temperature keeps rising, other behavior is triggered such as use of water to cool the hive, and bearding to lower the number of bees in the beehive.

How do Honeybees Control Humidity in a Hive?

If the humidity of the beehive cavity gets too high, honeybees fan dry air into the beehive. The air can be warm or cold. Air that is cold does not hold water as readily as warm air. The bees may also warm the beehive to cause water vapor to be held in the air inside the beehive, and then expel that warm air from the beehive together with the moisture that is has.

Factors that Affect Temperature and Humidity in a Beehive 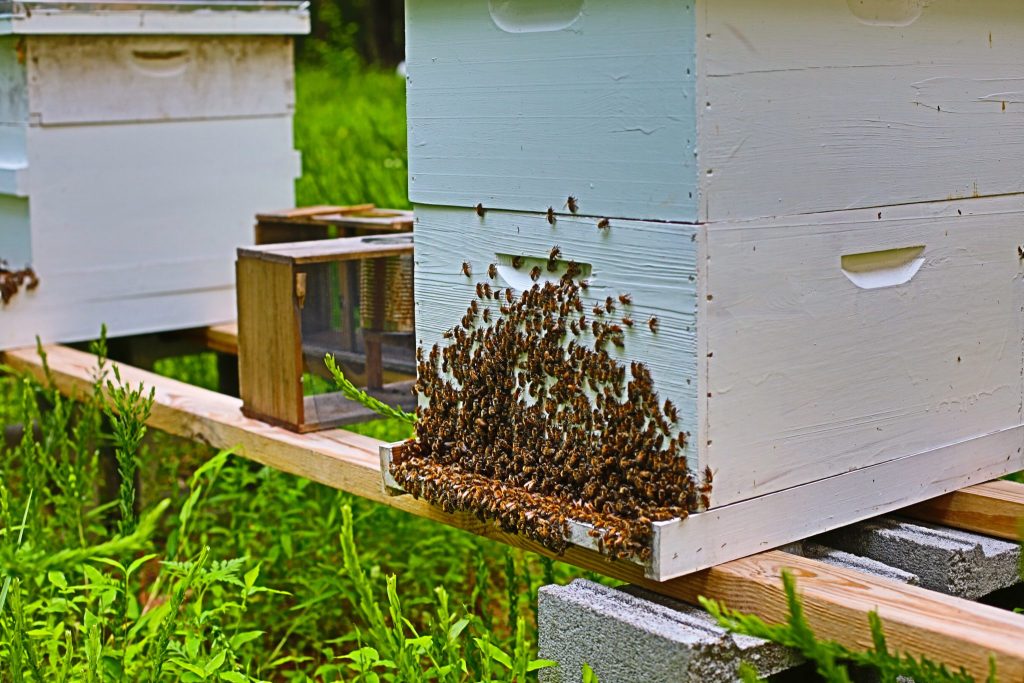 1. Season of the Year

In summer, there is warmth in the environment, and the air can get quite humid. Due to exchange of air between the environment and the cavity of the beehive, air entering the beehive impacts both temperature and humidity. This also applies in winter, spring, and in fall seasons.

During winter, there is a big threat of condensation forming inside the beehive. Droplets from condensed water vapor cause chilling of brood and extreme cooling of honey bees if they fall onto brood or honey bees.

Daytime hours are typically warmer than night-time hours. With warmth comes an elevated humidity level in typical scenarios. Beehives tend to get warm during the day and cool down during the night.

Warmth in the beehive triggers honeybees to start foraging in the morning, and to start carrying out other beehive activities. It is even recommended that you position your beehive with the entrance facing the direction of the rising sun. This is usually a southerly direction for US beekeepers.

Remember to install a windbreak in front of your beehives, in the direction of prevailing winds to prevent strong draughts from blowing into the beehive.

4. Honeybees Collecting and Processing Nectar into Honey in the Beehive

Nectar from plant flowers has a high concentration of water and a low concentration of sugars. It undergoes processing in the beehive until it turns into honey. Firstly, it is passed from forager bees to worker bees in the beehive. This process causes minor reduction of the amount of water in the nectar. Once worker bees take custody of the nectar, they put it in cells that are open.

In the open cells, the nectar loses water until it reaches a concentration of 17% water content. Once it has reached the 17% water concentration, the nectar is called honey. Honeybees seal the cell with ready honey using a thin layer of wax. The process of nectar losing water while in the honeycomb cells is both natural through evaporation and induced by honeybees when they fan warm air through the beehive.

Activities by beekeepers affect beehive humidity and temperature by causing drops or rises. They may also have effects of varying degrees on how honeybees maintain temperature and humidity in a beehive. Beekeepers opening up the beehive for maintenance or other purposes are likely to cause cooling of the beehive.

The second way that beekeeper activities affect the temperature and humidity in a beehive is through the setting up of beehives, colony management, maintenance actions and the general running of beekeeping operations among others. All actions by the beekeeper have an impact on the honey bee colony, and, ultimately, the beehive too.

Consider too, your actions such as removing propolis from wood joint areas of the beehive. If such propolis was there to seal small cracks and openings, you leave the beehive with an unwanted entry route for air and moisture from outside the beehive.

Beehives require careful selection of their locations. They also require shielding against several weather elements. Poor location of the beehive or apiary can result in the beehive being predisposed towards being too hot, too cold, or too humid. Locations such as near bodies of water or under many large trees keep the beehive continuously cold. Closeness to water bodies causes the beehive to be very humid.

Equally, you should not place a beehive at a location where it is too exposed to weather elements such as direct sun and winds. Provide shielding for the beehive so that it does not get heated too much by the sun during the day. Gusts of wind should also not have easy and direct entry into the beehive. Windbreaks in front of the beehive help prevent the unintended cooling of the beehive.

Lastly, remember to elevate the beehive using a stand as much as necessary to prevent rainwater on the ground from entering the beehive. You should also avoid having snow covering the beehive entrance, or provide an upper entrance for honeybees to use during winter.

Materials that you use to construct beehives and their components have an impact on the temperature and humidity. Good quality wood provides insulation for the beehive against large losses and gains of heat. Wood is also a good regulator of humidity in the beehive cavity. Using high-quality materials ensures that the beehive gives great performance in helping honeybees keep a good balance of temperature and humidity. Low quality materials such as wood that does not easily absorb moisture or provide thermal insulation leave the bees with a lot of work to do.

The arrangement of beehive components during setting up the beehive is also useful in helping honeybees regulate temperature and humidity in the beehive. A beehive with all components set up well performs well in heat conservation and humidity control. It should not have unused spaces that can greatly contribute to loss of heat.

Using many wooden components in the beehive helps boost humidity regulation because wood can absorb and release moisture from and to the air respectively as needed. Placing a condensation blanket or moisture board in beehives during winter is one way that you can use to help in the controlling of humidity in the beehive.

The optimum beehive temperature and humidity is easy to maintain for honeybees. They use various tactics to ensure that the beehive remains conducive for habitation at all times. Interference by the beekeeper can be helpful or harmful to the efforts of honey bees in controlling beehive conditions. Any drastic or sudden changes in temperature and humidity are not good for your honey bees.