Drones are the male bees whose role is dwarfed by that of the female worker bees. Nonetheless, they play an important role of sustaining the colony’s lifeline. An understanding of the drone bee’s survival and wellbeing is a fundamental when raising successful honeybee colonies. Being able to recognize drone comb is an important for both new and experienced beekeepers.

About the Drone Honeybee 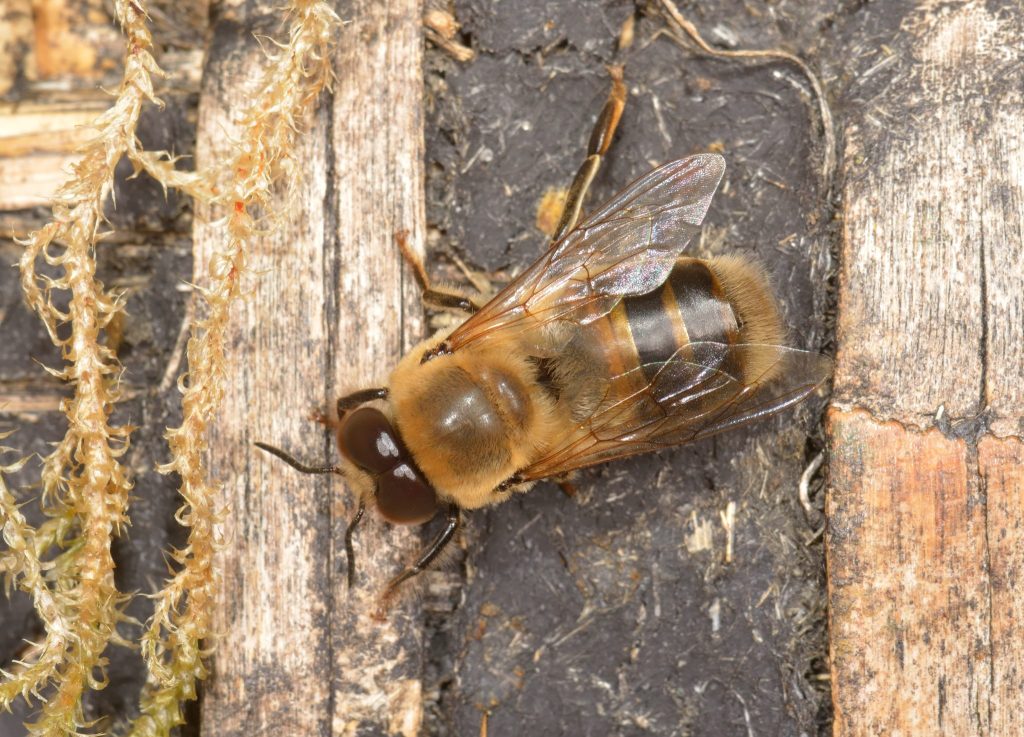 The drone bee is the male honeybee. Drones are born from unfertilized eggs and have one of the shortest life spans when compared to the other types of honeybees. They are also the simplest to comprehend since their role is quite straightforward, that is, mate with the queen bee during what is referred to a “mating flight”.

The worker bees are bestowed with the responsibility of caring for the drone bees. Not all of the few drone bees born during summer and spring end up mating with the queen. This special role is reserved only for a select few drones.

The drone lacks a stinger and is harmless. They appear to be the only honeybees that have an easier time within the colony. This does not imply, by no means, the task of mating is any easier; the penis of the drone bee tears out of the body during mating for the queen bee to store sperm. Ideally, this leads to the death of the drone bee. Any other drone bee that fails to mate with the queen bee is prohibited from accessing the hive food reserves by the workers. Ultimately, these drones are driven out of the hive and end up starving to death.

In terms of physical appearance, the drone bee is easy to identify. They have large eyes that make their work easier during the mating flights. The eyes are twice the size of those of workers and queen bee. The body size is also larger than worker bee but smaller than the queen bee. A stouter abdomen is also noticeable in drone bees.

A drone bee in a nut-shell:

The Life Cycle of the Drone Honeybee

The drone bee, as explained earlier, is critical for the sustenance of the honeybee colony. These are fertile males that will mate with the queen and ensure the continuation of life for the colony. They are essential for the expansion and creation of future bees.

Drone bees emerge from unfertilized eggs and that is why they are regarded as haploid. Basically, to form a drone bee does not require male bee intervention. The hundreds of drone bees formed per season are formed with the absence of a male parent.

Interestingly, worker bees will lay eggs that will create drones in some instances. This is however rare, since the queen bee and other worker bees prevent it from happening.

Mature drone bees will congregate with other drones during warm afternoons, forming a cloud comprising of more than 11,000 drones high in the sky. This will occur during the mating flight, and will be about 10 to 40m above ground as they await virgin queen bees. The queen bees join the frenzy an hour after departure of drone bees. She will join the cloud of drone, alluring to a number through her pheromones and visual cues. She will then be pursued by the drone bees, with about 10 to 20 of the thousand present, successfully mating with her.

Each of the drone bees that manage to mate with queen bee will die after the work is completed. Any of the drones that succeed in mating will have died within a few weeks of being born. Others might be lucky enough to live for about 90 days if it does not mate with a queen bee.

The drone bee plays an important role in any colony. These include:

The drone comb is not everyone’s cup of tea. This can be attributed to the fact that the drone honeybee is the least appreciated. Nearly all beekeepers have a preference to worker bees since these perform the most work within the colony. The drone bee is viewed as lazy and least useful. This is a misconception that should be avoided. Each honeybee has a role to play, however small the task might appear.

It therefore follows that every honeybee colony will instinctively raise only a few drone bees at one time. It is particularly common for honeybee colonies to build drone combs during swarming seasons.  This is usually during spring. Consequently, the worker bees will create drone cells that are larger in size, unlike others.

For domesticated honeybees the task of building drone cells proves to be a challenge. This is unlike feral bees that can build these drone-size cells with so much ease. This is the case since the beekeeper has put in place standard sized frames that tend to be worker cell sized. What this means is that worker bees have to design the drone cells by utilizing available space which is limiting. You will therefore find the drone cells in most unlikely areas. For instance, drone cells can be found between boxes. You might also find drone cells in damaged honeycombs. Combs that also have holes in them can be utilized for making drone cells as well.

Damaged frames are also utilized by honeybees. The bees will repair the frames and build drone cells on it. You can therefore find an old one with plenty of drone cells on it. The main cause of the damage on these frames is often regular handling. The beekeeper might find these completely out of use save the bees.

How then do you identify drone cells? Well, drone cells can be described as follows:

Analyzing drone comb can be easy once you get the drill. For starters, it proves challenging to differentiate a drone cell from a queen cell. Fortunately, frequently handling these cells and familiarity with it proves to help over the long haul. In fact, a drone bee tends to be almost the same size with a queen and hence not easy decipher as well. The drone with its plump structure in addition to its large eyes is easy to notice. This is unlike a queen bee that has a long and slender body structure. The drones are treated by contempt by most beekeepers but this should never be the case.

At maximum, a healthy colony should have 15% of drone bees. Drone brood is essential for the survival of the bee colony and should not be undervalued. Drone brood is widely used in various industries such as pharmaceuticals and health and wellness industries. Some of the areas of its application include: treatment of liver diseases, treating fertility issues in men, liver disease treatment, osteoporosis, boosting immunity, boosting cell development, and boosting fetus health. It is also used as a healthy product in animals.