The honeybee colony is complex by design and handle seamlessly a number of tasks: defense, communication, division of labor, food production, nest building, colony condition control, and many others. Within a colony exists a number of cells and it is crucial for the beekeeper to understand how each looks like. Knowing how to identify and analyzing queen cells is essential since this is where the future of the colony is pegged.

Insects are regarded as being the most diverse of any other living organism. The honeybees, which are a part of this diversity, are social insects that live and flourish in colonies. Within a colony lies different honeybees with each assigned a unique role. Ideally, a honeybee colony comprises of three types of adult bees. These include the queen, workers, and the drones. Together, a colony is capable of handling a variety of complex tasks that are essential for their continued existence.

What is a Queen Bee? 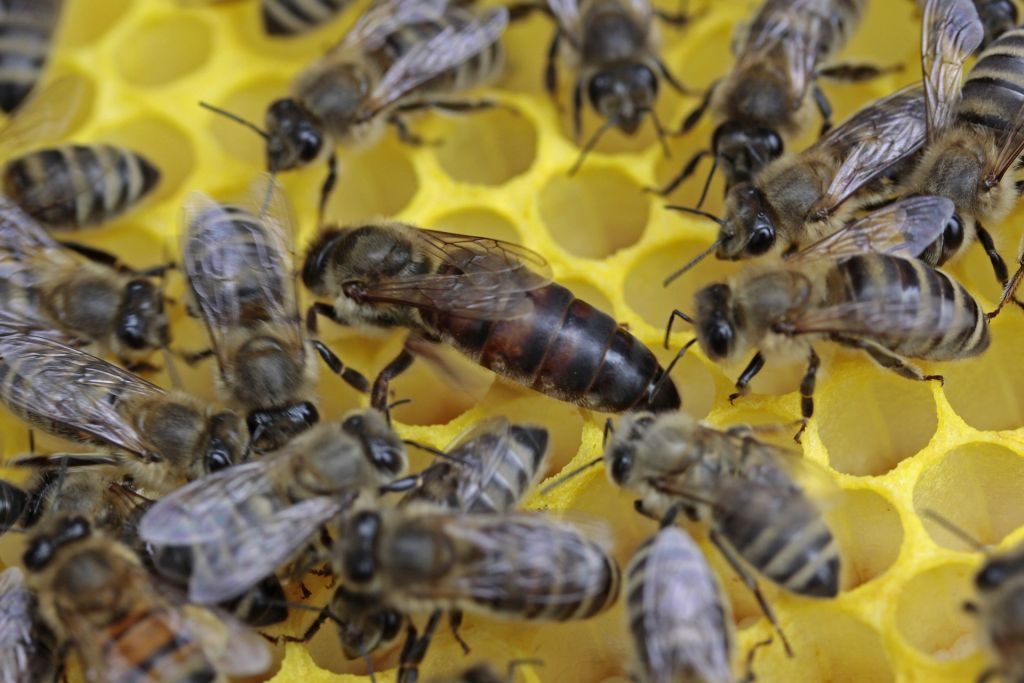 The queen bee is the centre of attention in any honeybee colony. And it goes without saying that each colony must have one queen. This is of course with exceptions of when the need arises to raise a new queen, while a queen already exists. This often occurs prior to swarming or when the colony is preparing a supersedure (more on that later).

The life of a queen bee begins when a queen cup is made by the worker bees. This cell is large, boasting about 25mm to provide sufficient room for her development. The queen egg is covered with wax at 9 days and will stay for 16 days when the queen bee is hatched. She will then be fed primarily on royal jelly, from birth and even after the three days lapses after worker and drone larvae cease in being fed on royal jelly.

The queen bee will find her way out of the queen cup by chewing itself out of it. Once her head begins to show, worker bees will help her out of the cell.

The primary function of the queen bee is reproduction. She is therefore the only fertile and sexually developed female in the colony. She will produce both fertilized and unfertilized eggs throughout her lifetime, with the peak egg laying seasons falling in summer and spring.

A queen bee has the potential of laying a million eggs in a lifetime, and about 1,500 eggs every single day during peak seasons. You can expect a queen lay about 250,000 eggs every year. This thus justifies her crucial role as the lifeline for any honeybee colony.

The queen bee can easily be deciphered from any other bee within the colony. Her unique 20mm size makes her much larger than the worker or drone bee.  She is thus conspicuous within the colony. In fact, she will be at her biggest size during the egg-laying seasons, a time when the abdomen is swollen and elongated.

The notable features of the queen bee include wings that only cover about 2/3 of her abdomen. The thorax is also bigger and she does not have wax glands and pollen baskets. Interestingly, the queen bee has a stinger that is curved and longer than that of worker bees. She can use it to sting multiple times and never die.

Additionally, she will use the stinger to position eggs and fight other queens when necessary. This occurs whenever a colony swarms leaving behind a queen with other queen eggs yet to hatch. These sisters have to be eliminated by the dominant queen since one queen has to remain in the colony. This is executed by chewing through the wax capping on the cells securing her sisters. She will then proceed to implant the deadly stinger on these young queens, thus decimating them. Fortunately, the queen bee is docile and will never sting the beekeeper. She is at highest productivity for about 2 to 3 years and will live for up to 5 years.

Queen bees produce a chemical substance referred to as pheromones. This is the to as “social glue” of the honeybee colony. The name suggests the role of the chemical as a unifying factor within a colony. It is also essential for assigning a unique identity to the colony. This brings into mind the importance of using a newspaper when combining honeybee colonies.

The colony relies hugely on the queen bee, with its qualities relying on the egg-laying capability of the queen. The chemical production and genetic composition of drone and queen will also dictate the size, behavior, and quality of a colony.

What are Queen Cells? 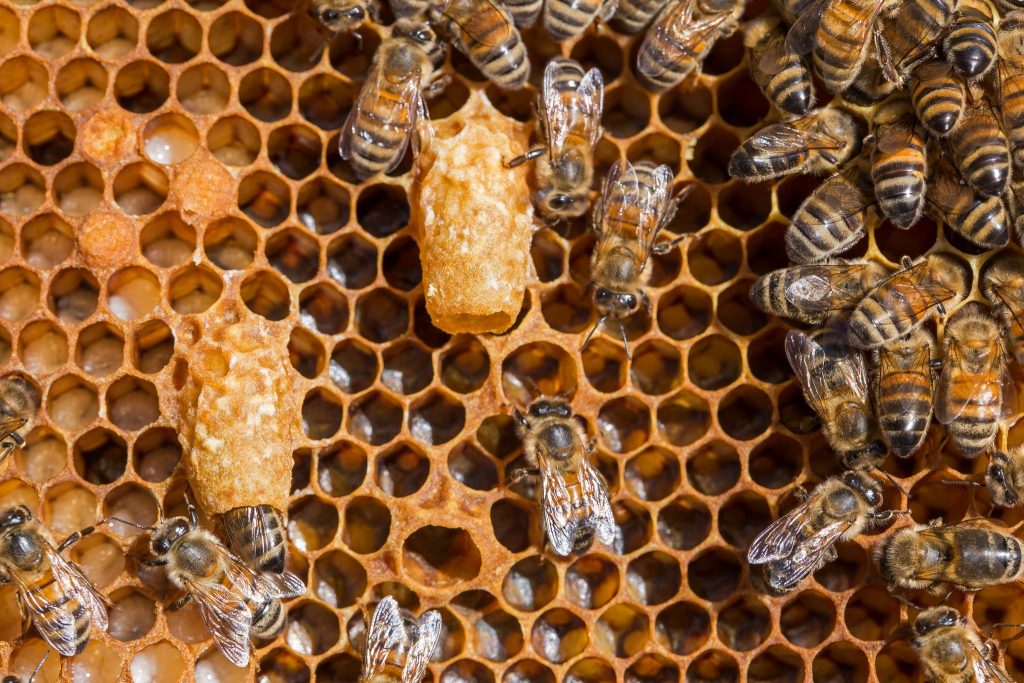 Queen cells are of three types. These are the swarm, supersedure and emergency cells. The three are quite alike and it might not be easy to tell the difference, especially if you have never seen these before. Fortunately, we shall decipher all that in a minute. However, it is important to understand what a cell is.

The term “cell” simply refers to a closed space created by worker bees and serves many purposes, including raising a brood, or pollen and honey reservoirs. A number of interconnected cells within a colony make a comb.

The queen cell thus refers to the space where the larva will grow and mature to be a queen. This space is much bigger than any other brood cell and is about 1 inch long with a rough textured surface. The queen cell is also similar to peanut shell in shape.

Queen cells are designed by honeybee colonies for three reasons. First off, is what is referred to as swarming. This occurs when a bee colony has overgrown the available beehive space and decides to split the group and move to some other location. The worker bees will begin to prepare to move out with the existing queen, leaving behind a newly made queen. A colony that is too large may pose a serious risk for survival of honeybees, hence the instinctive need for swarming. Workers are ideally in charge of all preparations for swarming and will search for a new location prior to the migration.

Second scenario occurs when existing queen is deemed unproductive. By this we mean, she is unable to produce enough brood to sustain the colony. This can be attributed to a sick or aged queen. She might also run out of the genetic material for fertilizing eggs. In some instances, a queen may die unexpectedly, forcing the worker bees to begin building queen cells. The incoming queen will restore normal operations within the colony.

The last reason for the construction of a queen cell, occurs in an emergency, when the queen unexpectedly dies or is no longer able to reproduce.

How to Identify Queen Cells

Queen cells, as explained earlier, are created by adult worker bees for three main reasons. Therefore, to identify queen cells, you need to know the difference between the three types.

These three types of queen cells are: 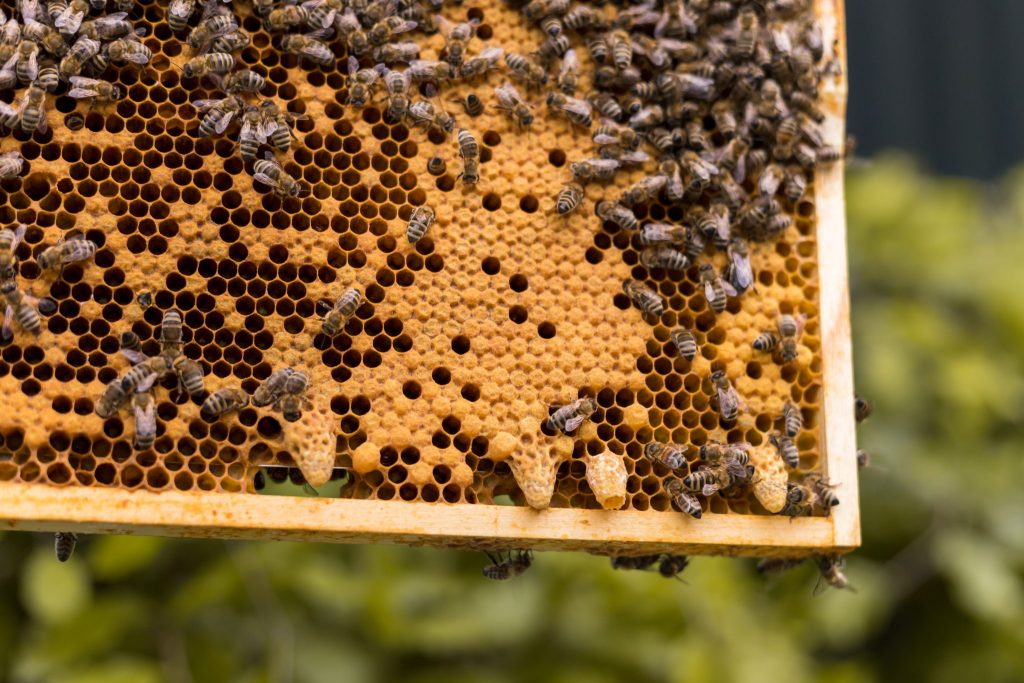 This is created when the honeybee colony is forced to raise a new queen as a replacement for an ill or aging queen. This new queen will take over or supersede, hence the name supersede queen cells.

Worker bees will build a number of supersedure cells at once to boost the probability of getting a healthy and fertile queen. Once the cells begin to hatch, the first queen will be fed and she will be the new queen.

Supersedure cells can be identified on comb faces. They tend to hang downwards and are extensions from the comb surfaces. You can find between two to three supersedure cells in a honey bee colony. They are placed at the middle of combs, unlike swarm cells that tend to be built on the edges. 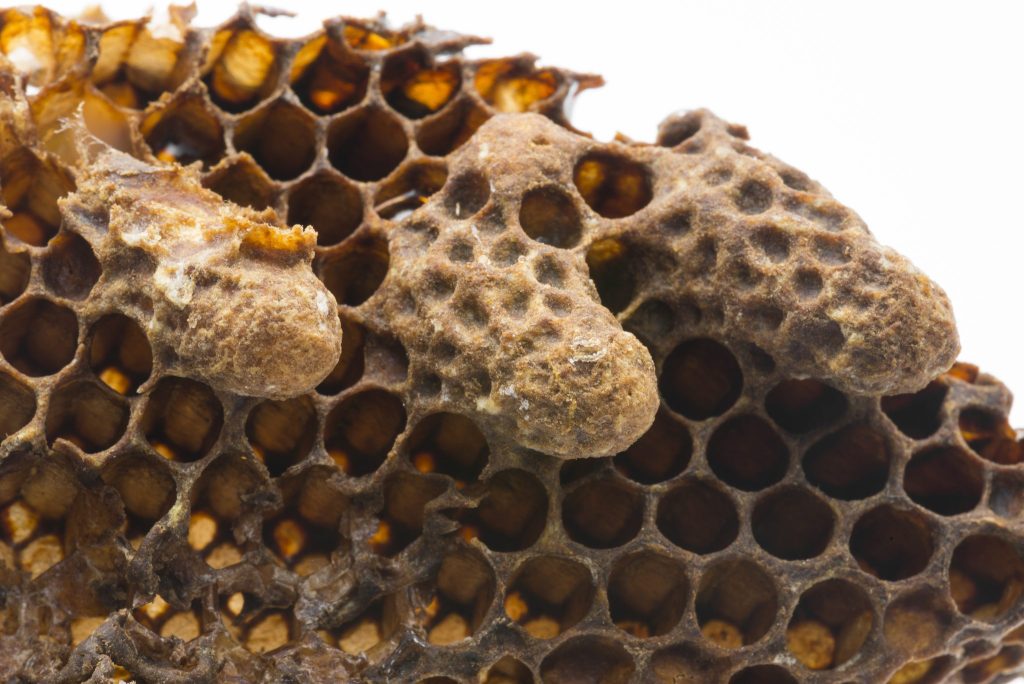 Swarming is a natural phenomenon in a honeybee ecosystem. Honeybees have existed in the wild for hundreds of years and they are self-sustaining. The swarm cells are built by the worker bees with an intention of producing a new queen that will replace the one about to leave the colony.

The workers will produce plenty of swarm cells but only one of the queens will take charge of the honeybee colony. It is therefore common to see 3 or more swarm cells in a colony. These are usually swarm cells of different ages.

Swarm cells are easily distinguishable since they can be found along the comb margins or edges. They will also be built when the colony is prospering and expanding rapidly. It is the overabundance of bees that force the workers to make new queens as they prepare to split the colony and move out. The sight of a swarm cell is therefore a good sign that the colony is healthy and growing.

A new queen replaces an older queen when a swarm cell is built. The older one will move out with its share of adult bees to create a new home elsewhere, leaving the young queen to take charge of the remaining bees.

A swarm will usually take place through a number of steps:

In addition to the swarm and supersedure cells, are the emergency queen cells, though this is very rare. This is usually created by the worker bees out of a brood cell. It is created after the occurrence of a catastrophic event. The emergency cell will be located half inside a brood cell and another half draped over the margin.

Queen cells can act as a signal for an upcoming swarm, or portray the existence of a sick, dead, or weak queen. The beekeeper should be on the lookout for queen cups. These are dome-shaped cells that can help predict what could happen or is happening within the colony. Queen cells are easy to tell and are of three types: swarm cells, supersedure cells and emergency queen cells. Each of these cells are created by the worker bees for a reason. It is therefore important to understand the essence of creating either of the two.

Remember, honeybees are naturally prone to swarm and take full charge of when and how to raise a new queen. In reality, the beekeeper is simply a helper or observer of what is happening within a colony. He/she should however embrace this responsibility with caution. Honeybees require the right conditions in order to thrive and survive and this should be provided at all costs.

Unfortunately, despite the fact that bees are beneficial to humans and the natural environment, there still exists some level of cruelty on the part of humans in the way they directly or indirectly interact with honey bees. Chemicals and pesticides usage affect honeybees, and there is still room for improvement on how these are used, especially in areas close to apiaries.