An Introduction to Mason Jar Beekeeping

What is Mason Jar Beekeeping?

The beekeeping industry has come a long way. Beehive designs have been invented and reinvented. Just not long ago, no one imagined you could keep bees on your rooftop, or let alone keep bees in your apartment house in the city. All these have become possible thanks to the selfless efforts put forth by beekeepers across the globe. Mason jar beekeeping happens to be one of the latest inventions in beekeeping. It is well suited for small spaces and all that it takes is a little research and planning for one to begin. Literally dozens of beekeepers who reside in the city or anyone with a suburban backyard can now raise bees the Mason jar way.

As its name suggests, Mason jar beekeeping refers to keeping bees in Mason jars. The Mason jars are fitted into the ordinary hive, where in this case the bees will utilize the Mason jars when making combs and honey instead of (or in addition to) using hive frames. Once the honey jars are filled with honey, they are taken out of the hive. The bees might take some time to figure out the use of the jars. However, once they get things right, it becomes so much easier for the bees to build their combs inside the Mason jars. A DIY project for Mason jar beekeeping is possible and this can be done by anyone with some wood, bees, and the jars.

Getting Started in Mason Jar Beekeeping 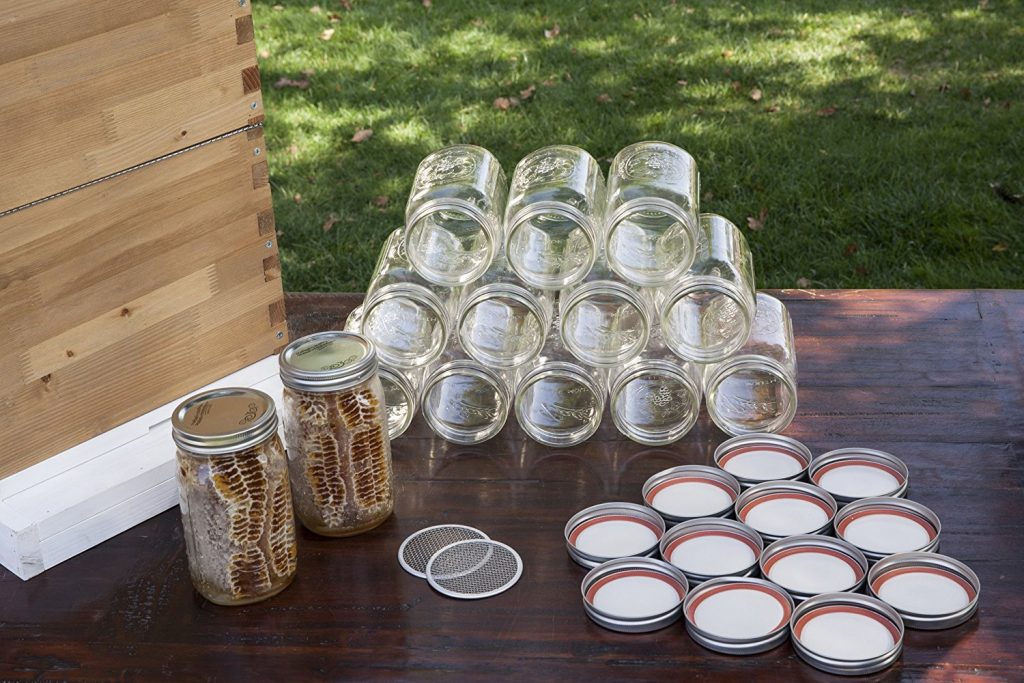 Perhaps you have seen some photos of beekeepers that have tried Mason jar beekeeping, or read some success stories about keeping the honey bee in jars. These may seem too good to be true. However, it is indeed true anyone can begin keeping bees in Mason jars. Most beekeepers within the USA have tried this with success. It is not as complicated as one might imagine. Mason jar beekeeping entails combining Mason jars with an existing hive. The jars are placed above the hive box supers.

One of the simplest designs of the Mason jar hive is a combination of a square board made from pine. A borer is then used to drill equally spaced holes that will hold about 6 to 8 Mason jars. The excluder is not required in this hive design, though you can place an empty super box above the jars to act as shelter above the jars and provide a platform for holding the hive roof in position. Most standard hives have the desired height that can accommodate the Mason jars.

The wooden board that holds the Mason jars is at first measured and cut to the required fit for the hive. Holes are then bored into the board and these will be same size as the Mason jar mouths.

The First Few Weeks are the Hardest

The first few weeks upon setting up the Mason jars may prove to be the most challenging and disappointing. The bees may seem to take no notice of the jars and they might not begin building wax and combs on the jars for awhile. Later on however, they will begin by building wax on the sides of the jars then build the combs upwards. If you are keen, you will notice some of the combs protruding from underneath the jars. The bees should be allowed to take their time when building the wax and combs, even if this could be a slow process.

You should avoid lifting up the board or jars at this time. In most cases, the bees will focus on the hive frames before moving up to the jars. This should not discourage you since they work on what they are familiar with at first. That means it will take a while before they build combs in the jars. Once they begin, they will fill up the jars in no time. You should however take off the jars before the bees store too much honey in them. There is only a little space to build the combs and that means it might not take much time to get the jars filled.

History of the Mason Jar

Tinsmith John Landis Mason born in Philadelphia in the year 1858 had no clue that one day the Mason jar would be useful. His quest to find a safe storage for food led him into discovering the Mason jar. The jar has become useful in households and commercial enterprises. Boiled fruits, honey, vegetables, butter, and many other products are now kept in the Mason jar. The transparent jar is now used in Mason jar beekeeping and this has been a great step in alternative beekeeping practices. 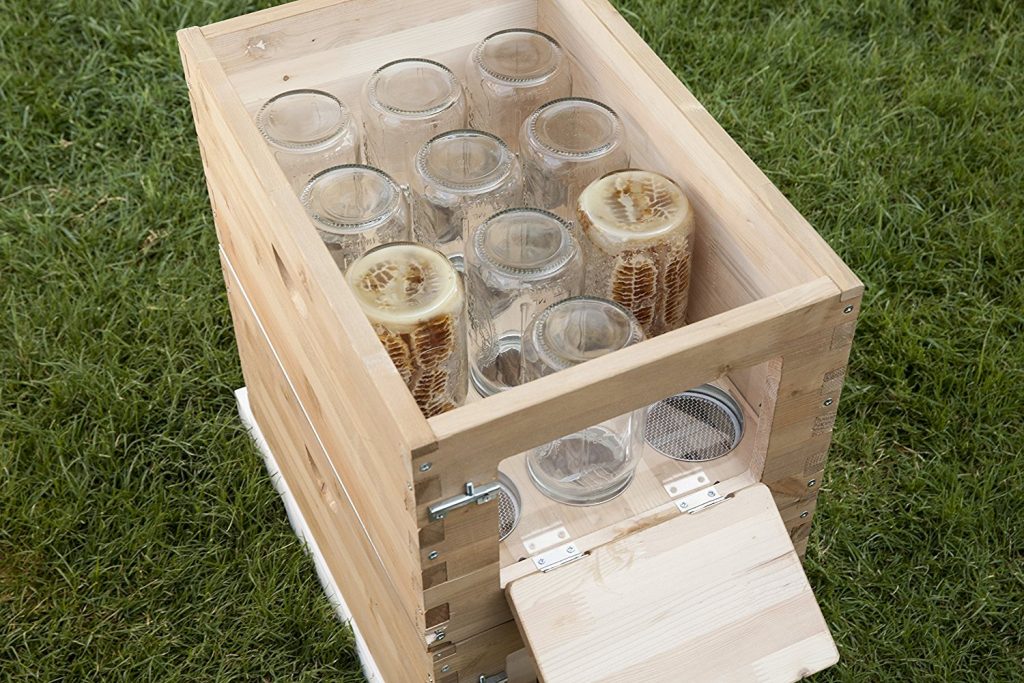 There is a big difference between a Mason jar beehive and a regular Langstroth hive:

One popular Mason jar beehive out there is the:

This is a top hive for the novice. It is an innovative hive that has been designed to perfectly to fit the jars which will be filled with honey. This is well suited for all locations whether a rural setting or suburban location. You can also place this on your rooftop whether in the city or rural area. The hive has been built using Canadian Hemlock wood that has been harvested sustainably.

Mason jar beekeeping has its share of challenges just like any other type of beekeeping. Some of these challenges include the following:

The harvesting of honey and comb from the Mason jar beehive follows a different procedure from other beehives. Where smoke is used with other beehives, you cannot use smoke with Mason jar hives. If you do, the smoke persists inside the Mason jar and adds a burning wood flavor to honey.

The construction of the Mason jar hive also needs to be very accurate. Any space left between the jar and the sides of the hole it is placed into, attracts bees to seal it up. Propolis is used by bees to firmly attach the Mason jars to the beehive. Getting the jars free requires more effort in such a scenario. If this happens, gently pry the Mason jars free of the beehive using a hive tool. Take care not to crack or break the jars or damage the wooden board.

Comb that is around and between the Mason jars should also be removed so that you can easily lift them off the wooden board of the beehive. Once you are sure the Mason jars will come off easily, remove them one by one. You can place the jars with drawn comb and stored honey in a container such as a basket or bucket waiting further processing.

Once you have taken Mason jars out of the beehive, check them for integrity. Cracks on the bottle are a weakness through which air can enter the jar and cause honey to ferment. The jars with cracks and those that are broken should be separated from the ones that are intact. The broken ones should be discarded properly and carefully, as their sharp edges can cut you. Honey in such Mason jars is best discarded together with the jars. Pieces of the broken glass of Mason jars may be in the honey and hurt you when you attempt to consume it.

When carrying out a Mason jar beehive harvest, you should pay attention to comb under the jar. Any honeycomb that protrudes outside the jar is a problem. It prevents proper closing of the jar. The section of comb that protrudes out of the jar is best cut off using a sharp knife.  It can be a heated knife so it cuts through the honeycomb with ease.

How to Get Honeycomb and Honey from the Mason Jar

The collected Mason jars contain drawn comb in them and honey stored in the comb. Getting everything out of the Mason jar can appear to be a difficult undertaking. It is however a simple thing to do with the right tools and following the right procedure. It is important to keep in mind that the total amount of beeswax you can collect from Mason jar beekeeping is small, and may not be economically viable.

When comb is visible, uncap it by inserting a sharp knife into the Mason jar. Other clean and food safe items such as a fork can be used. The aim is to open up the cells in the comb so that honey can flow out. These beehives have bees build comb in mason jars while the jar is upside down. Once uncapped and placed right side up, the honey flows out of the cells with ease. Once all the honey is out of the cells, you can scoop it out of the Mason jar for daily use. The comb that is left in the jar is later cut up into small pieces that can be easily removed.

Sometimes, you want to eat comb honey. If that is your preference, you should cut out the comb from your mason jars without first uncapping the honeycomb. It gives you chunks of comb that you can chew on. The chewing action forces honey out of its cells into your mouth.  This method of utilizing Mason jar comb and honey is enjoyable. It is a wholesome method of eating honey. However, it can turn messy if not managed well.

You can go old-school and crush up the comb and honey in the Mason jar. The resulting mixture of honey and wax comb is then strained over a collecting container. This is an old method of honey extraction. It gives you clean honey but is time consuming. Its effectiveness with small amounts of honey such as from a mason jar is low. Since it is not a quick method of accessing the honey and comb in the Mason jar, you cannot use it if you are in a hurry.

If you have been considering engaging in beekeeping that maximizes productivity per square foot then you should try using a Mason jar beehive. This is the latest method of raising bees in small spaces, backyards in suburban regions, or rooftops in apartments. It complements the standard hive and does not take much to design and build. As the name suggests, the bees build the combs inside the jars, fill them with honey, and this can be harvested by the beekeeper.

Have you ever used Mason jars in your beekeeping before? Leave a comment below and let us know what your experience was like.

About | Privacy and Disclosure
© Copyright 2022, BeeKeepClub. All Rights Reserved.
wpDiscuz
2
0
What are your thoughts on this article? Please leave your comment.x
()
x
| Reply