Fluvalinate is a synthetic pyrethroid that is commonly used in the control of Varroa mites in bees. Fluvalinate is sold under varying brand names and is one of the first pesticides to be registered with the EPA for the control of Varroa mites in the United States. It may be applied in form of strips or other preparations. The Fluvalinate Mite Killing Pest Control Varroa Strip® comes in packages of 20 yellow colored plastic strips. No license is required to purchase and use these strips as the pesticide (Fluvalinate) is already licensed. This article looks at using Fluvalinate for Varroa mite treatment and the benefits it gives you in your beekeeping operation.

The recommendation is to use two strips per brood chamber in the apiary. With each package containing 20 strips, the Fluvalinate Mite Killing Pest Control Varroa Strips are a cheap and effective Varroa mite control solution that is effective in the control of the Varroa mite. A single pack of this Varroa mite control solution is enough for small beekeeping operations. Larger operations can also use the strips just as effectively. It gives you 20 strips to use in the affected beehives. The recommended rate of application is 2 strips per beehive brood box.

Each plastic strip contains the active ingredient in the pesticide (pyrethroid). Fluvalinate Mite Killing Pest Control Varroa Strip strips have a shelf life of 2 years. You can use a few strips if you just have a few hives and store the rest for up to two years without the strips losing their efficacy. However, just like any other pesticides, care must be taken to ensure the safety of those handling them. The strips should be handled with protective gloves and must be out of reach of children if stored at home. In commercial apiaries, they should be placed in the store and clearly labeled with clear dates of first use. The handler must wash their hands carefully and avoid handling food of any kind. Remember that honey produced during the period of treatment must not be used for human consumption.

Fluvalinate Mite Killing Pest Control Varroa Strips, as a pesticide can be used to control a Varroa mite attack that has already happened to an apiary. However, the strips can also be used to ward off attacks and to prevent infestation.

Fluvalinate is a contact pesticide which kills the Varroa mite when they come into contact with it, providing up to 100% control of Varroa mites when properly used. The ease of applying the Varroa mite control strips makes them suitable for the seasoned beekeeper, the one who is just starting, commercial apiaries as well as small outfits. A single pack of this Varroa mite control solution is enough for small beekeeping operations. It gives you 20 strips to use in the affected beehives. You can also use the strips as a preventive measure to arrest infestations in their early stages or prevent them from happening at all.

Fluvalinate Mite Killing Pest Control Varroa Strips are hung between the frames of a hive just outside of the brood nest. Insert two strips in the brood box for a period of six weeks (two brood cycles). Note that the strips should be inserted, spaced apart hanging on different frames fairly centrally in the brood nest where bees will walk over them. Fluvalinate should not be used during a honey flow.

As the bees come into contact with the Fluvalinate strips, they pick up a minute amount of the active pesticide (Fluvalinate). Immediately one minute piece is picked up another similar minute quantity emerges from within the strip to take its place on the surface to become available for the next bee that comes into contact with the strip at same spot. As the bees interact within the hive, the active ingredient is spread throughout the colony.

A single pack of this Varroa mite control solution is enough for small beekeeping operations. It gives you 20 strips to use in the affected beehives. You can also use the strips as a preventive measure to arrest infestations in their early stages or prevent them from happening at all. The recommended rate of application is 2 strips per beehive box.

Fluvalinate Mite Killing Pest Control Varroa Strip has a shelf life of 2 years. This allows you to store it for later use if you do not use up all the strips in the pack at once. If storing them after opening the pack, keep the strips in their original packaging and then put the pack in a sealable bag. The strips should be out of reach of children. Your safety is also important; wash your hands after handling the strips or their packaging.

Fluvalinate should not be re-used too frequently in the same beehive as its efficacy will be diminished and will not be effective. The preparation such as strips must be disposed-off after a maximum of six weeks (42 days).

Fluvalinate strips have been proven to be highly effective over a six week treatment period. It leaves very little residue and is released in small doses making it an environmentally friendly pesticide. Using Fluvalinate for Varroa mite treatment in strip preparations leaves no detectable residue in honey though it must never be used during a honey flow.

Fluvalinate Mite Killing Pest Control Varroa Strips, if properly used as per the manufacturer’s directions, are highly effective. As a contact pesticide it provides up to 100% control of Varroa mites. However, recently, perhaps due to improper application and overuse, there are increasing reports of Varroa mites developing resistance to the pesticide, prompting beekeepers to be wary of using it alone in the control of the Varroa mites in their apiaries. The recommendation now in using Fluvalinate for Varroa mite Treatment is to use strips as part of an integrated Varroa mite control measure. The Fluvalinate mite killing pest control Varroa strips are rotated with other treatments in a bid to increase its effectiveness and reduce the development of resistance. 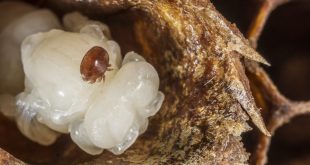 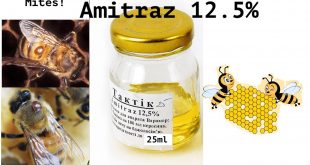