It is baffling how and why the honey bee seems to be a target of almost any predator. We thought we knew it all until recently when a new enemy of the bee just emerged – the Asian giant hornets. 2020 is indeed a year bursting with its share of challenges. In this article, we’ll discuss protecting honey bees from Asian giant hornets.

Asian giant hornets are not new to other countries such as Japan or France. It is reported to have first landed in France in 2004 and that may explain why they are much ahead when it comes to the control of the giant Asian hornets. The “killer” insect has been reported in other neighboring countries as well. It mainly targets the honey bee and other native pollinators. These giant insects with their characteristic orange to black markings complemented by long stingers, were first sighted in Washington late 2019. In late 2019 also, a complete hive of the Asian hornet found near Nanaimo, Canada was identified destroyed.

Asian giant hornets pose a serious threat to the declining bee population within the United States, and scientists have now raised their concerns. What is particularly surprising is the fact that no one understands how the insect came to the USA in the first place. And it is worrying that it might spread to other states. How then do you protect yourself and your honey bees? Read on to find out.

How Asian Hornets Were Introduced to the USA

No one knows how the Asian giant hornets were introduced to the USA just yet. According to scientists, they may have been brought to the USA through international cargo. The insect, also referred to as Vespa mandarinia or Japanese giant hornet, is the largest hornet globally. They prefers temperate and tropical regions and that can explain the reason they are common in South Asia, Russian Far East, East Asia, and Mainland Southeast Asia. They prefer low mountains and forests and avoid plains and high altitude regions.

About the Asian Giant Hornets 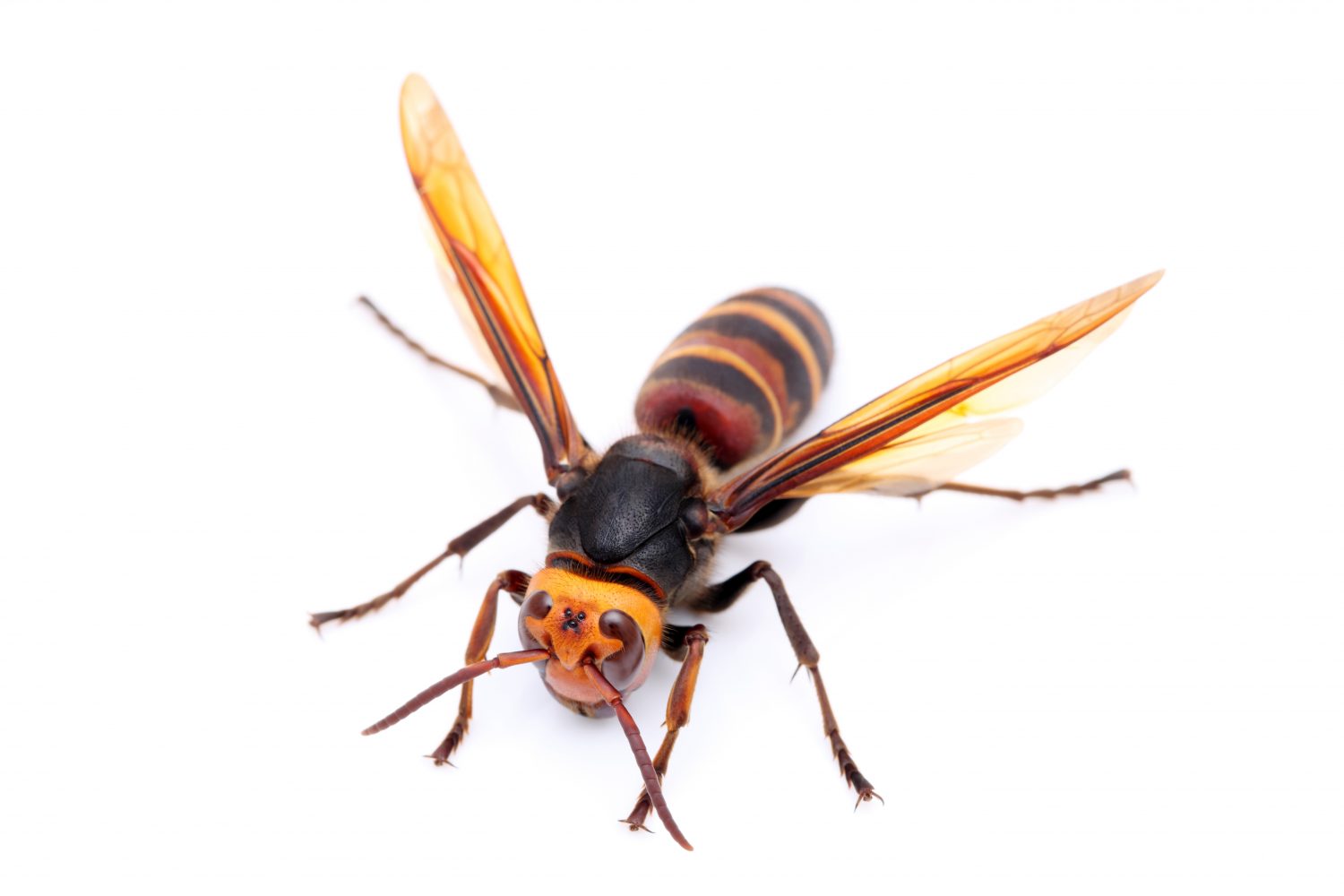 Asian giant hornets have been duped “murder hornets” or “killer hornets”. That is apparent given the fact that they kill an average of 30 to 50 persons a year in Japan. The numbers of those killed within the USA have not been reported, since the insect is new there. The deadly insects are particularly aggressive to people who approach their nest. They tend to be difficult to control and with their ravaging nature, this is worrying.

Asian giant hornets are easy to spot. They have black to orange markings and signature stingers that are longer than normal. The Asian giant hornet might look the same as the Asian hornet, but these two are different. The latter has yellow legs. The giant hornet has a light orange head with yellow orange base. It also has a black tooth for digging, a dark brown thorax and darker forelegs.

As you might have guessed it, the queen of an Asian giant hornet colony is larger than workers. They measure about 50mm or 2.0 inches, with the workers being about 40mm or 1.4 to 1.6 inches. They look similar but workers do not reproduce. Asian giant hornets also have drones that do not have stingers.

The Asian Giant hornets have their origin in East Asia and Japan. They are social wasps that live in colonies. Their colony, similar to the honey bees’, is made up of a queen and many workers, which play play similar roles. The workers are responsible for feeding the colony and will fly for miles in search of food. The main sources of food for Asian giant hornets are many kinds of insects, with a bias on the honey bee. They seem to have an insatiable appetite for the honey bee. They also feed on tree sap and honey from the bees.

The hornets create their nests by either digging or occupying pre-existing tunnels, especially those dug by rodents. They might even occupy spaces in rotten pine roots.

The Asian giant hornets are most dangerous in late summer and early fall. This is the period when the workers are busy hoarding protein foods for their young queens to be prepared for the following year.

Asian giant hornets seem to be trained invaders. Their mode of predation is mind-boggling. The hornet workers are relied upon as the food hunters for the colony. They will fly out for miles in search for food for their queen and young ones. They basically look for all kinds of insects but with a seeming preference to the honey bee. Once a honey bee colony is sighted, the hunt begins.

The hunt is normally conducted by a single scout which could be two or three Asian giant hornets. These will cautiously approach a hive and produce pheromones that will direct their nest mates to the hive’s location. The workers will then begin onslaught. The hornets will utilize their huge mandibles to decapitate the heads of the honey bee guards. They will then proceed to the inner parts of the colony. They come in a small group and a just few of them can decimate an entire honey bee colony.

It has been established that a single giant hornet is capable of killing up to 40 bees in one minute. About 30 hornets will completely destroy tens of thousands of honey bees within a few hours or less. They are capable of flying for up to 100km in a single day and move in speeds of up to 40 km per hour. Asian giant hornets are known to also cannibalize on each other. Their killer instinct seems to have no limits.

The second step that follows after the slaughter is feeding. They will camp on the beehive for a week or even longer, focusing on what is there to be devoured. Main culprits targeted include the honey bee pupae and larvae. They consume all they can get and will feed their young with the loot.

Adult giant hornets rely on fluids or juices from their victims. It is only the young larvae that can feed on solid protein delivered by the worker hornets. The adults are responsible for chewing the loot into paste which is then fed to the larvae. The workers dismember victims and pick the most nutritious parts of the body to be delivered to their nest.

Asian giant hornets are so dangerous since they attack humans as well. Their giant stingers that are a quarter inch long cannot be stopped by any protective wear, including beekeeping suits. It pierces through easily and its venom has been found to be fatal, even for those without an allergy to insect stings. Their venom usually leads to kidney damage, resulting in death.

Watch the video below to see just how quickly they can decimate an entire honey bee colony.

How to Protect Honey Bees from Asian Giant Hornets 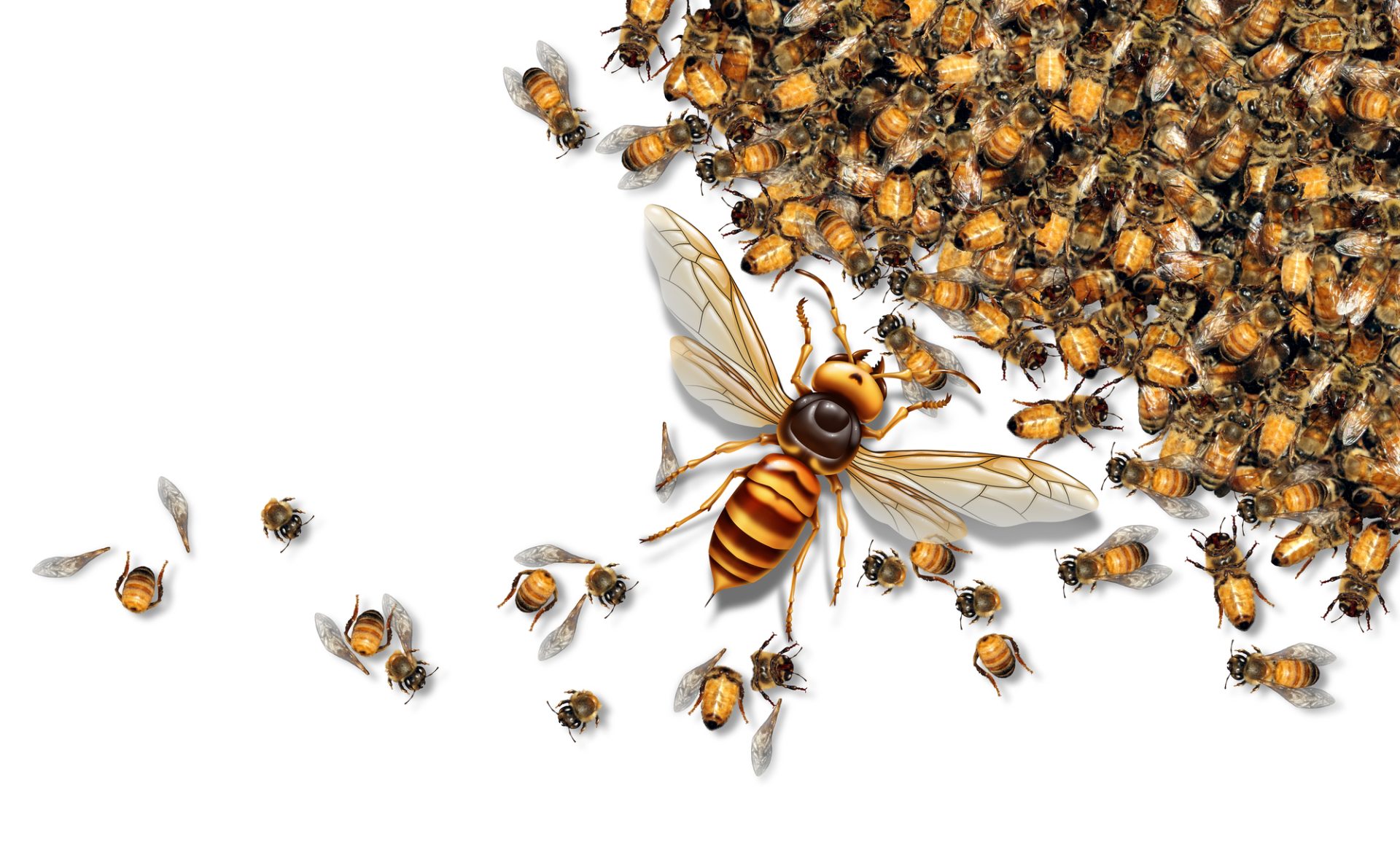 The European honey bees (Apis mellifera) need to be protected from Asian giant hornets, since they have not devised defense mechanisms against these predators. They can sting the invaders but their venom seems to have no effect on these killers. Conversely, the  Japanese honey bees (Apis cerana japonica) seems to be able to successfully protect themselves from the Asian giant hornets. They bite off their wings and suffocate them. This can be attributed to the fact that they have been a target for years and hence have adapted to the attack. You therefore have no choice, but to protect your bees at the present time.

The best time to catch the Asian giant hornets, as explained by scientists, is between July and October. At this time the colonies are established and its workers are out searching for food. It may not be so easy to catch queens but setting the trap as early as April will help better your changes.

To protect your bees from Asian hornets, employ a combination of these strategies:

The first step is for the beekeeper and anyone to contact agricultural officials the first time they see the giant hornets. It will not be wise for you to take it down on your own. Remember, when a single hornet is seen, it certainly means a colony of the killers is nearby. Identifying their colonies is helpful when it comes to the eradication efforts against the Asian giant hornets.

A bait trap placed inside the beehive can help catch the Asian giant hornet. It is a compartment designed within the hive that will direct the giant hornet into a hole that is difficult to escape from when trapped. This is built on top of the hive and will allow the bees to escape easily, but the giant hornet. The baits that lure giant hornets include millet jelly solution, fruit essence, crude sugar, vinegar or intoxicants.

You can buy traps for Asian hornet. This was designed specifically for the Asian hornet, but can be just as effective with the Asian giant hornet. It is referred to as the ApiProtect. It is an economical and non-toxic option that is effective in trapping the insect. Tests which have been conducted in France and its surrounding areas have been successful. It is particularly effective when used as directed and will trap the targeted creatures and none of the untargeted.

This sticky board has been part of an ongoing effort to eradicate the giant Asian hornets. It is designed for areas where the insect is prevalent and poses a risk of decimating bee colonies. It is easy to install and use. The trap should be placed on specific areas of the hive, just before an attack by the hornets begins.

You will need to provide a raised cover to keep the board away from birds and rain. It should be placed in an elevated position and away from flying colonies. Monitor the odorless trap regularly and discard it once it is full of the Asian hornets.

Traps at hive entrances can also help catch the Asian hornets. The trap should allow the bees to escape easily and capture the hornets.

This method entails the use of wooden sticks that have flat heads to hit the giant Asian hornets. It should be employed when the hornets are in the hunt or slaughter phase. This is their most vulnerable time and will not attack. They are most dangerous after they have invaded and occupied a hive. At this time they have decimated their enemies and will guard the hive. This method is however time consuming, not efficient and quite dangerous.

Asian giant hornets can be exterminated by removing their nests. You can burn or poison their nests. The challenge would be the identification of a nest in the first place. These killers can fly for up to 8 km away from their nest making it almost impossible to locate their nesting area. That is the reason why it is important to contact agricultural officials when you see any of these insects. Mass poisoning can also be effective in eliminating them. Hornets that have captured a hive can be fed a sugar solution or poisoned bees. This is then expected to spread to their unknown colonies, leading to mass deaths.

Despite the fact that Asian giant hornets pose a serious risk to the survival of the honey bee, it is our collective efforts that will make a difference. We should not panic during this time but rather employ proper strategies in handling the problem at hand. We live in trying times when the bee population is continuously facing new challenges. Luckily, a combination of the measures above will help in protecting honey bees from Asian giant hornets.

Asian giant hornets are a major threat to beehives. What measures are you taking to protect your honeybees from this predator? Leave a comment below and let us know.