Beekeepers must understand the challenges that come with their work. Keeping off predators is part of the job and it takes effort to keep bee colonies safe. It is less understood how much it takes to raise bees in terms of the time, money, and manpower invested in the business. The sweet honey in addition to other honey bee products, is a result of hard work. Predators and pests pose a serious risk to honey bees. Raccoons also referred to as “coons”, are tiny mammals that prefer to roam about at night. They are found throughout the United States but most common in dry or arid western plains. In this article, we’ll discuss protecting beehives from raccoons. 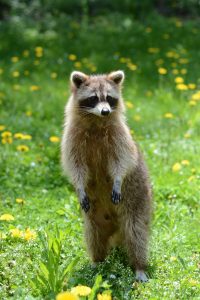 Raccoons are fuzzy creatures that have bushy tails, in addition to a black mask of fur covering the eye region (commonly referred to as bandit mask). They are beautiful to behold and look friendly from afar, however, they can be pretty fearsome up-close. Overall color range is from salt-and-pepper gray to black with the prominent mask over its eyes. They are easy to spot with their stocky and heavily furred bodies. They have four legs and a ringed tail.

Raccoons are comparable to small dogs and will usually grow to about 23 to 37 inches, or approximately 60 to 95 cm. The weight is between 4 to 23 lbs or 1.8 to 10.4 kg. These creatures exist in most regions of the world, including Europe, Japan, North, and Central America. They live in dens made inside caves and trees. You can also find raccoons living in abandoned cars, barns, and other man-made structures.

Raccoons are nocturnal creatures that are not very sociable. They spend most of their time sleeping during the day and will show up near human settlements and apiaries at night.

Raccoons live in dens during periods of severe weather such as winter. They will lose a lot of their body fat during this time. Families stay together for approximately one year, and the majority of the raccoon population normally comprise many young raccoons. Raccoons have five toes with paws that make them agile. They are good runners, climbers, jumpers, and swimmers. They can break into the garden easily since they are extremely agile and well-equipped with claws. Also, they climb into chimneys easily and can sneak into the house in their search for anything edible.

What do Raccoons Eat? 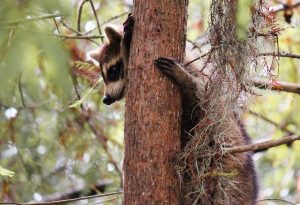 These tiny mammals are omnivorous, relying on both meat and vegetation for survival. The vegetation comprises cherries, corns, apples, berries, beechnuts, acorns, walnuts, persimmons, watermelons, wild grapes, citrus fruits, figs, and peaches. They can even eat dead animals. They are not good hunters but will manage to catch small prey such as a squirrel or mouse.

Raccoons lead a solitary lifestyle, meaning they hunt and dine alone, save the mating season. They however stay within the same area in a group of families. They have insatiable appetites during summer and spring as they store food in the form of fat for the upcoming winter.

The baby raccoon’s diet mostly comprises its mother’s milk for 16 weeks. After this period, the young coon begins to explore some other food choices. Some may even begin exploring before the 16 weeks elapses. The baby raccoon is referred to as cub or kit and is normally born during early summer. A female will give birth to about 1 to 7 offspring. The young ones become fully independent within 8 to 12 months of age, living for a period of 2 to 3 years when in the wild.

Various animal are included in their diets, including frogs, bird eggs, clams, fish, insects, rodents, and crayfish. Most raccoons prefer forested areas with a source of water. However, it is common for some to raid gardens, since it is an easier source of food. Backyards and gardens that are close to a forest prove to be the best spots for raccoons. Raccoons may even invade your home when searching for food. The sharp claws on their toes come in handy when capturing prey in the water or on land. They also use them for digging up grass and dirt when searching for grub. Homegrown fruits and vegetables are a delicacy raccoons cannot resist. They normally lookout for these when rummaging through the trash bins.

Signs of a Raccoon Infestation 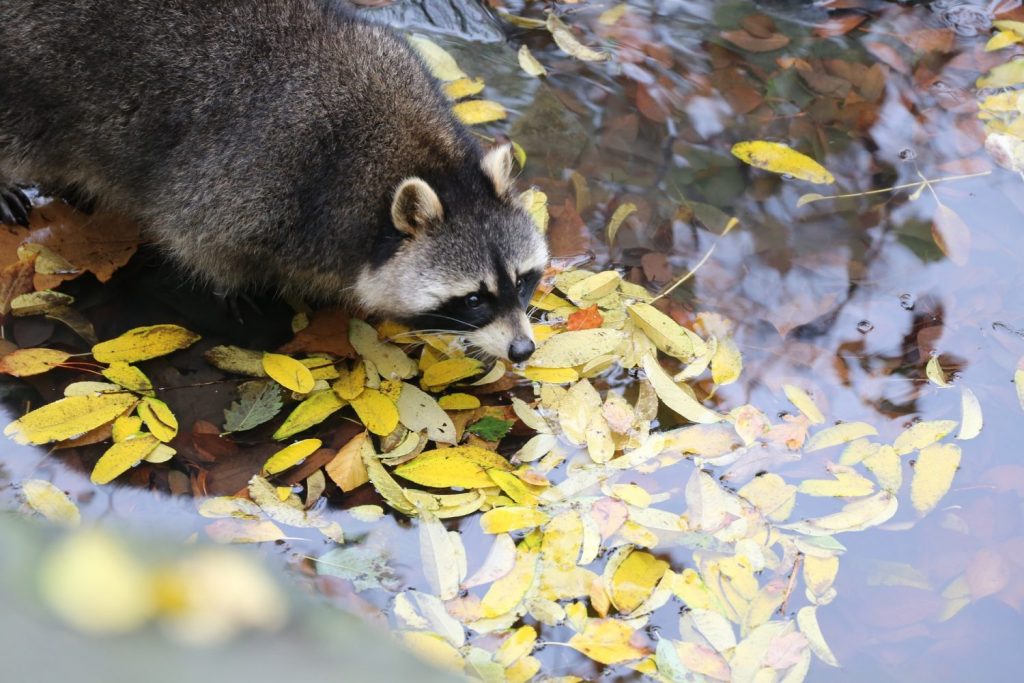 Raccoons are easy to spot and hear. You can check out common structures within your backyard or home for signs. Damaged insulation, wall, shingles, wood, or tampered hive entrance are common signs.

You can also check out garbage cans. Raccoons will make a mess of these in an effort of finding some food. The trash being dispersed all over the backward could mean the presence of a raccoon. Watch out for visible raccoon paws prints as well in the yard.

You will also find bird nests destroyed, damaged crops and gardens, and poultry killed. Any of these activities could mean raccoons are within the area. You might also hear loud thuds and noises resulting from raccoon movement.

Raccoon attacks on honey bee colonies are less prevalent but still occur, causing significant damage to the apiary. Raccoons feed on insects but will not resist the sweet honey. They will often try to access the empty stacks of supers stored in the beehive and tear frames of the combs to get the honey.

Raccoons are small in size unlike bears, and will not manage to topple over beehives that are full of bees and honey. They will instead use their claws to get to the frames. One sign of a raccoon invasion on the apiary includes the presence of damaged frames of drawn comb that have been removed from empty equipment and are scattered all over the bee yard. The raccoons will leave the occupied hives untouched.

Raccoons are attracted by empty beekeeping equipment such as used supers and frames. These make it easier for the invaders to notice the honey bees. A clean bee yard is therefore ideal for keeping off a predator such as a raccoon.

Raccoons will least likely feed on honey bees as one might have expected. This is unlike skunks that are insectivorous, chewing bees to extract the juices from their bodies, then spitting out the solid parts. Raccoon attacks mainly target the honey in the bee colony. Bears are even much worse, incurring substantial damage to apiaries. They will smash the hive to get to the bees and the honey. They also behave similarly as skunks, frequenting the location of attack until they have exhausted all they can get from the apiary.

How to Deal with Raccoons

Beekeepers can apply various strategies when dealing with raccoons. These include the following:

1. Seal off any potential entry points for raccoons

The most common entry points for raccoons include broken vents, openings on fences, holes, openings on roofs, uncapped chimneys, and any potential entry point. You can place a mesh over chimneys to prevent raccoons from entering your home. Build a good fence over your backyard. An electric fence would be quite efficient in keeping out raccoons. A two-wire fence would be ideal, with one at least 4 to 6 inches off the ground and the second 12 inches. Fences should also go underground at least far enough to block access. Tree overhangs should also be removed.

2. Place a mesh around the hive

Spiking on hives will also help deter raccoons from proceeding further to attack the bees. These should be placed above the mouse guards. A small mesh around hives can also keep off raccoons and other predators that target honey bee colonies.

The use of shock deterrents will work on raccoons. It is however not effective on other parts of their body, except the nose and mouth. These predators are covered with fur making it hard for the shock deterrents to get to their skin. Put some bacon grease or peanut butter on the energized wire to draw the attention of the predator. This will shock the predator as it attempts to sniff or lick the substance.

Lighting at night can help deter raccoons from venturing into your backyard. They prefer darkness and that is the reason they come out often at night and rarely during the day. You should however avoid any form of lighting such as white light, since it hurts the bee behavior and cycles. Night-guard lighting that is solar-powered is ideal for keeping off raccoons. It flashes out a red light that will certainly scare away intruders, including humans.

Keep trash in hidden areas to avoid attracting unsolicited attention from intruders such as raccoons. You can keep the trash bins in a locked shed or outhouse. Avoid keeping them in open areas. You should also use tight and animal-proof lids to keep off invaders such as raccoons. All pet doors should be kept shut whether at dawn or night.

6. Keep bird feeders out of reach

Keep bird feeders and fountains out of sight since these provide easy feeding grounds for raccoons. Where possible, remove these especially if not necessary. You can also keep them covered and inside closed doors to avoid attracting these predators.

Some noise will scare off raccoons. You can place a radio in the middle of the backyard near the beehives. Let it remain to play all night to scare off these creatures.

Dog hair or human hair also scares off raccoons. They tend to be sensitive to any human smell. Take advantage of this and use anything that can keep them off, including a clothed scarecrow in the backyard. You can also keep a dog for security purposes within the backyard. The barking at night will scare away raccoons and other intruders.

Live raccoon traps also work. These can be placed within the backyard but you will have to check out state laws before using traps. In most states, any animal that is captured should be taken and released 3 miles away. The best part about trapping raccoons is that they eat almost anything. Therefore, you can use almost anything for bait.

Planning for apiary growth will also help not only prevent raccoons but also other predators. New colonies should be evaluated earlier to avoid granting access to predators to these new colonies later on. Hive locations should be well planned to prevent the bees from wandering off. Important requirements such as wells or water sources and pollen and nectar sources should not be far from the bee colony.

Beehives are a target of raccoons and other inquisitive predators. Your defense against these predators should be a priority from the get go. Beehive designs should incorporate the best defenses against invaders. The backyard should also be properly secured to keep off huge predators. For instance, electric fences will help keep away predators. Insect predators such as yellow jackets should also be kept at bay by incorporating inaccessible entrances. It is also important to be on the lookout for paths used by these hungry predators.

Raccoons have different ideas on how to attack the hive and get what they need. Check out for signs of invasion and counter them immediately. They never target the bees and do not have the capability of toppling off occupied hives. They instead lookout for an empty stack of hives and take out frames from honeycombs. There you will find dispersed all over the bee yard, a sure sign of a raccoon invasion. The raccoons may also try to get to the filled hives using any potential openings. As such, be sure to utilize the tips in this article when protecting your beehives from raccoons.

Have you ever had a raccoon problem? What are your thoughts on this article? Leave a comment below and let us know.