If you are a beekeeper, then you might be wondering whether a frog can pose a serious risk to your bees or not. As you know honeybees are a major target of many predators that include birds, bears, skunks, raccoons, and many others. You may have asked yourself, do frogs eat bees? Yes, frogs do in fact eat bees. Let’s discuss.

There are approximately 5,000 species of recorded frogs in existence, with scientists continually discovering many more. Frogs come in different sizes and colors and inhabit a wide variety of environs. They are however not found in extremely cold areas of the world such as Antarctica.

Frogs belong to amphibian species that are ideally small vertebrates that require moist conditions or water for survival. Within this species are some common vertebrates such as frogs, newts, toads, and salamanders. Their common characteristic is that they can all absorb water through their skin and they can also breathe.

Some examples of frogs include: 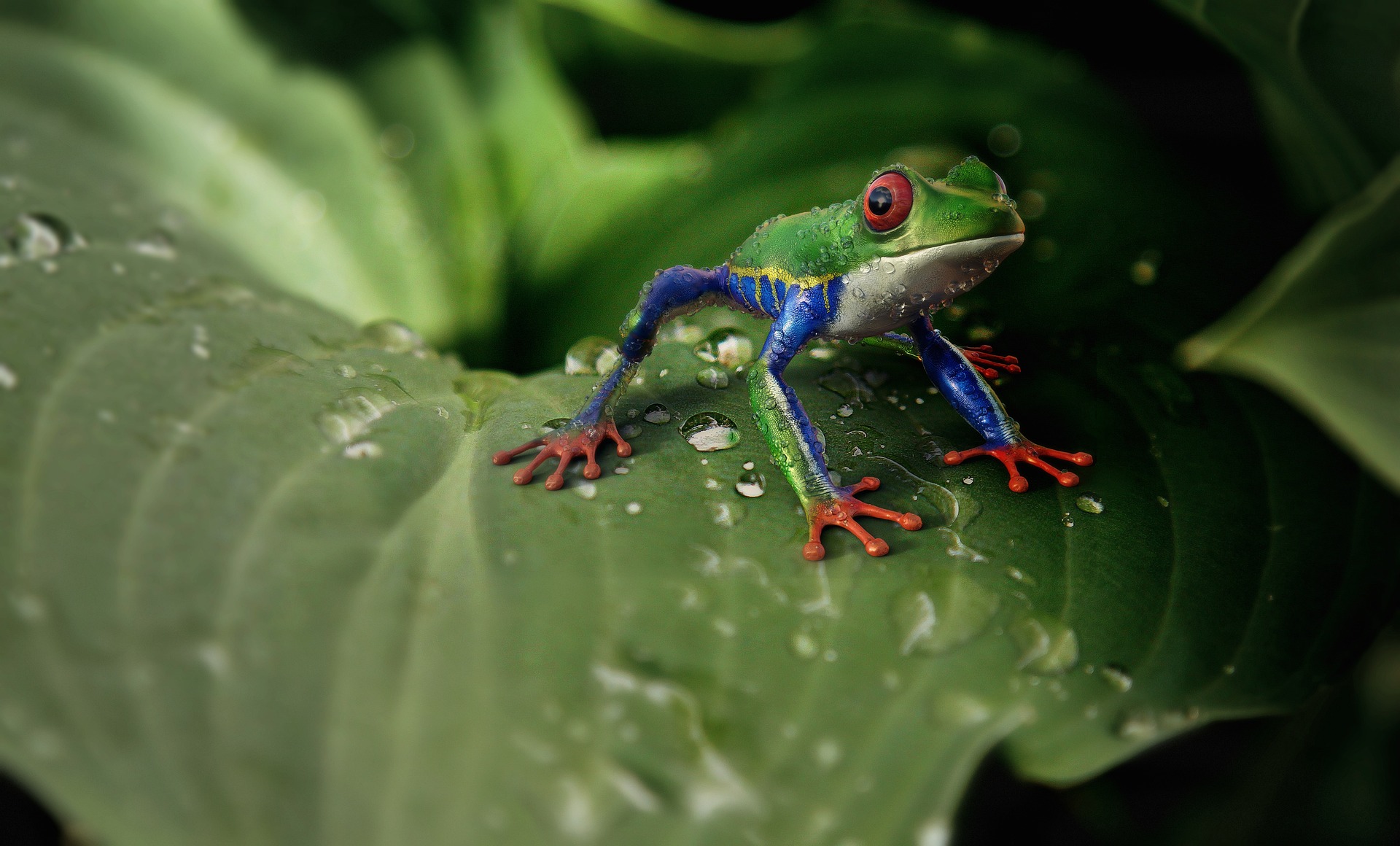 With frogs being generalist predators, it means they can stomach almost anything imaginable. They are particularly highly adapted to living in the wild where they have plenty of options when it comes to their food. Frogs will consume butterflies, spiders, flies, grasshoppers, rats, and any other things that can be put into their mouth. The frogs that primarily live in aquatic environs will rely heavily on aquatic invertebrates.

For frogs kept as pets, their food should be of the right size. The frog’s intestines can only handle the right sized feed. Gut-loaded insects make the best food for frogs since these contain the required nutrients. The feeding patterns of a frog and amount of food required will vary with frog species. Furthermore, the activity level and age of the frog will also come into play. The feeding pattern of frogs, just like in humans will have a direct effect on the overall wellbeing of the frog. That can explain why you will find some healthy and others obese. Frogs kept as pets should not be overfed; otherwise it will lead to obesity.

Some species of frogs such as the dwarf frog, young frog and toads, require plenty of food since they are generally regarded as high-energy frogs. This means they require a constant supply of food, consuming huge amounts of food twice or more within a day. Such frogs can pose a serious risk to your hive if they come close to a susceptible beehive.

You will also find some frog species that are not heavy feeders. These will generally feed after every third day. These species are not much demanding when it comes to their food intake. Interestingly, you will find some large frog species that never consume too much food. They however swallow huge prey such as a mouse and stay for another week or two before looking for another meal.

Another interesting fact about these creatures, is the fact that they do not drink water directly. Instead, their skin absorbs water which can then be utilized within their system. Experts recommend the provision of dechlorinated water to frogs kept as pets. You will need to build a small pond or avail a pool of water.

For frogs, some of the common food they enjoy include, but are not limited to the following:

Large frog species will devour mice, from baby mice to adult mice. Newborn mice are particularly the best food for frogs. However, it’s only the bigger frog species that can swallow huge prey such as mice. These include the African bullfrog and the Pacman frog.

The easiest prey around for frogs to feed on. These are available in local stores and can also be raised at home. It is a popular diet for pet frogs.

These are an excellent delicacy for frogs, not only in the wild but also for domesticated ones. These are particularly common at fishing bait stores. They can also be raised at home to make it easily accessible for your pet friend.

These in addition to other small worms make an excellent and main diet for aquatic frogs.

These make an excellent addition to a frog’s diet. They are not available in local stores. Wild frogs easily hunt and consume grasshoppers and locusts since they exist in large numbers in the wild.

But do Frogs Eat Bees?

The straight answer to that question is yes they do. Frogs will eat a variety of insects and that will include honeybees. Frogs have a huge appetite and are opportunistic in nature. They will jump at any prey that presents itself at anytime. Any living creature that is small enough to fit into the frog’s mouth will easily be devoured by the frog.

Frogs consume small insects and invertebrates with some exceptions of species that eat plant matter. Interestingly, a frog’s diet will depend on the time of the year.

The main reason frogs target bees is due to their small size. Bees also tend to be within reach for frogs and these are live and moving insects. You can find frogs outside hive gorging on fallen bees, but not dead ones.

Frogs do not feed on dead insects given the fact that they rely on movement when it comes to judging whether the object is good food or not. Any other object that is stationary will never provoke a frog.

Any frog will eat a bee that come close to it and moves. Additionally, bees are small enough to fit into a frog’s mouth. The frog’s field of vision is wide enough to allow it to see little things that move within this area. Anything that stands still will never be treated as food and will be passed by. The frog has been instinctively designed to perceive anything that moves as food and honeybees happen to fall under this category.

Frogs enjoy a wide viewing area thanks to their well-positioned eyes. Their visual system has adapted for years to associating little moving things as food. Therefore anything that moves within its peripheral vision is perceived to be a meal and will be devoured. Contrastingly, anything stationary is treated as any other object, and can never be treated as food.

Frogs can be likened to other popular vertebrates such as the lizard and chameleon, when it comes to the way they feed. They have sticky tongues and will eat bees and other insects in the same manner. Their quick mechanical response to any passing insect allows the frog to capture their victim without notice. The tongue is short and sticky, and that means the prey should be within range for it to be captured. The frog saliva is usually sticky before exposure and will turn into a watery substance when outside.

Frogs are habitual in nature, and will show up at the same spot for as long as their desired meal is available. It is therefore not strange to come across a frog under your beehive or at certain places where bees frequent. Once the insect is captured, the frog’s saliva covers it wholly and is quickly swallowed. It is the saliva that immobilizes the honeybees, rendering them incapable of stinging.

It is possible though for the frog to get stung once in a while. If that happens, then it sends a warning to the frog and it will be difficult for it to view bees as food later on. This can be attributable to the fact that frogs and another amphibians tend to very highly intelligent. They are capable of remembering any bad experience they have had before. For instance, a sting experienced will cause the frog to avoid any bee or insect that has black and yellow strips.

Various observations have shown that bees are capable of stinging toads and frogs. In fact, these predators are not immune to bee venom as many believe. A stinger will certainly inflict pain and instil fear in any creature and frogs are not an exception. Fortunately, frogs have a huge advantage of swallowing the bee before it stings. It is their saliva that makes their work much easier. The venom is also not detrimental to their wellbeing, and will never kill the frog. That can explain why some frog species such as the African Bullfrog, devours various insects including those that produce dangerous venom like wasps, scorpions, and bees. It worth noting though, that the immunity of the frog to any dangerous venom depends on the frog and toad species.

How to Get Rid of Frogs

If frogs are an issue for your beehives, then you should consider some ways of keeping them off. Your first choice would be to apply any of the below methods that work when managing frogs. Secondly, you can contact a pet expert within your locality.

To get rid of frogs affecting your beehives, you can:

So yes, frogs and toads do eat bees. The myth that frogs are immune to bee sting is also not true. Frogs might have the advantage of producing plenty of sticky saliva that immobilizes the bee, but they will get stung at times. Bees are a target of frogs given their small size and tendency to move around without staying for long at one spot. The frog instinctively perceives any small insect that can fit into its mouth and moves as food. This insect should also come close enough for it to be captured.

Even though frogs have no preference when it comes to their diet, bees prove to be a nutritious diet to them. The rich fat and protein found in bees provide an excellent addition to the frog menu. As a beekeeper, it will not be peculiar to find one or two frogs within your hive area or watering spots. These areas make excellent hunting places for frogs. You can chase them off as a security measure. It is worth mentioning though, that frogs do not have the capability of threatening the survival of your honeybee colony. They can eat one or two bees that come close enough and this rarely happens.