Beekeeping is done as both a hobby and business practice worldwide. Bees and honey are beneficial to human beings in many ways such as nutrition, pollination and medicinal. Bees are essential for pollination, Bees and other pollinating insects are facing danger of extinction, mainly due to intensive deforestation, use of pesticides, global warming, their habitat destruction, pollution, climate change and predation. This trend of bee’s population declining threatens agricultural and humanity wellbeing. Therefore, protecting the bees is a major concern. Skunks are one of the major predators to bees. In this article, we’ll discuss protecting bees from skunks.

Skunks exist in four species: the stripped skunk which is the most common, hooded skunk, the spotted skunk and the hog nosed skunk. The striped skunks are commonly found in semi-urban agricultural fields and areas near forests. They are covered with fur against cold. They are black and white in color. An adult skunk is about 2 feet and has a tail that is 7-10 inches, their weight ranges between 3-12 pounds, depending on several factors that include the season of the year, sex, age and its physical condition. They have unique adaptive features which include shy behaviors, secrecy and they produce a pungent smell when threatened, harassed or when they sense danger. Skunks do not hibernate but they are nocturnal.

Striped skunks are conspicuous and easily visible by their white stripes along the black fur and their long bushy tail. They often have a pronounced white stripe that may vary in color from white to black wholly. The stripe could be a single strip from the head to the tail or could double stripes appearing as if the skunk is having white and black bands.

Skunks mate during winter in their dens, after which in two months of gestation, the female skunk gives birth to 4-6 young ones. Generally the young skunks stay with their mother as they suckle and are fed for until fall or a year. As for the stripped skunks they reach sexual maturity at the age of twelve months and may live up to three years. In captivity they may live up to 10 years.

What they feed on

Skunks are omnivorous animals that feed on both plant products and animal products they mostly feed on the following foods worms, fruits, and insects like the Japanese beetle, tobacco worms, potato bugs, small reptiles, rodents, honeycombs, honey and bees. Many a time they dig cone shaped holes in lawns in search of grabs, they overturn large patches of insects rich turf, seldom they feed on small mammals, ground nesting birds and eggs. Skunks are active throughout the year and are less active during the cold months.

Where do Skunks live?

Skunks live in holes called dens and they prefer wood remains, weedy fields, bushy fences, and rocky areas in or near agricultural yards. They forage and protect young skunks from predators such as owls, eagles and move with ease in search of food.

Signs of the Presence of Skunks

Some of the indicators that skunks are present include cone shaped holes 2 inches deep and 3-4 inches across dug while in search of food. Another sign is their droppings which are unique and distinguishable from those of other animals, because they contain undigested insect coverings, undigested seeds and fur which may be found along trails near their dens. Another sign are habited barrows which may be easy to discern, because they have no spider webs and also the pungent smell around the barrows.

There are many signs to show that a barrow is habited by skunks or other animals. This include smooth walls as the animal rubs its body against the entrance while passing to and from the barrow. Another sign is the site of skunk’s hair hanging on the small roots and the rough surfaces around the barrow. Sightings and the pungent smell is a sure sign that tell of the presence of skunks. Also the marks on the soft soil tracks of the animal may be visible.

Yes, skunks do eat bees. They are very crafty in the way they entice the bees to come out of their hives. The method they use is to scratch the entrance of the beehive. In investigating the scratch, the bees come out of the beehive and they become an easy prey for the skunks, who can easily catch, kill and enjoy them as food. Skunks are insectivorous; they chew bees, extract the juices from their bodies then spit out the other solid parts. They also cause extensive damage to beehive itself. While looking for food, they are known to dig up the yard around the hives. 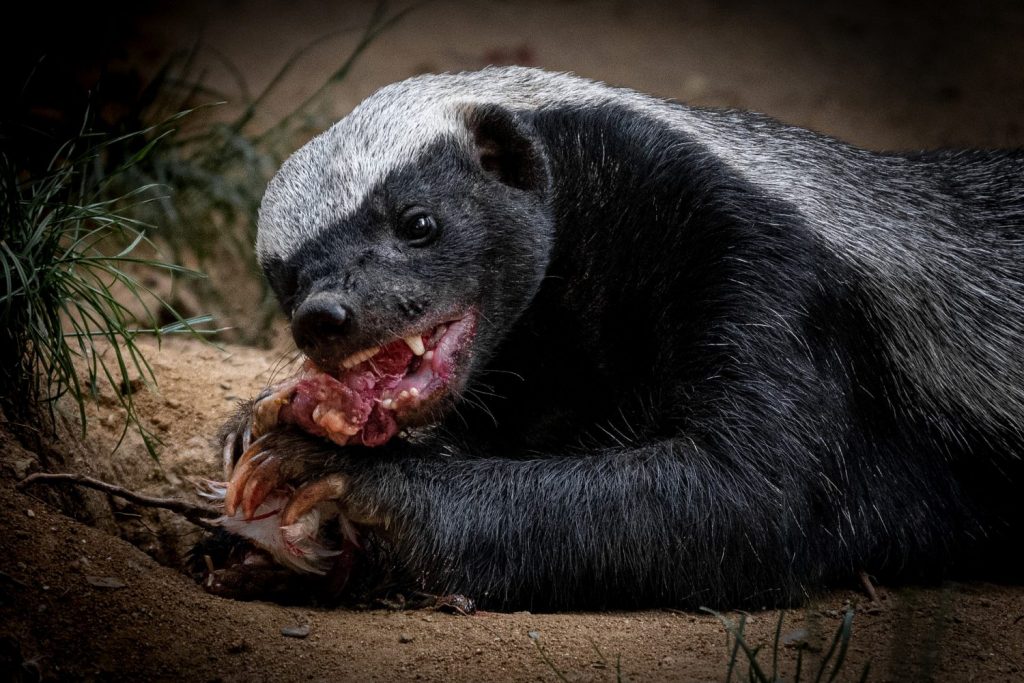 Beekeepers can apply various strategies to deal with skunk. It is advisable each situation is accessed independently to decide the best action for the circumstance. The time, cost, and duration of each method should be considered.

Garbage, food leftovers and kitchen waste will attract skunks. Safe waste management is done to reduce this problem. Mice, mites and other insects that occupy barns, garages, or sheds provide a source of food that can create a continuous skunk threat. Eliminating rodents is very important to curb this attraction.

Heaps and piles of wood, fence posts, and scrap metals provide shelter for skunks and may encourage them to stay and reproduce in the area. Cleaning up is one of the most important steps in discouraging skunks.

2. Use lighting and noise

Deterrent lights are used to provide temporary relief. Skunks enjoy when it’s dark, and that is the reason they come out often at night and rarely during the day. Skunks do not have good sight but they have a strong sense of smell. They will be able to see the two glowing LED lights, and will liken with the eyes of a predator. Because the lights are static, it’s unlikely that the skunk will spray the device. Instead, they are likely to leave the area. A radio is used to produce desired sounds. You should however avoid any form of lighting like white light since it has a negative effect on honey bee behavior and cycles.

Use aluminum phosphate gas cartridges to eliminate skunks from their burrows but laws vary by state and instructions should be followed.

You can catch skunks by using live or foot-hold traps. Live traps that have been designed for skunks are well-designed to keep the trapper from being sprayed by the skunk when disturbed. The traps are fitted with a plastic cover. You can also use wooden box traps since they also work in the same way.  Most of the traps are placed near the den site for successive nights to ensure that all skunks are trapped. The ideal bait for skunks is canned cat food, peanut butter, chicken, or fish scraps. When captured, skunks should be taken miles away from beehives.

Shock deterrents only affect the nose and mouth of the skunk. Skunks are covered with fur making it hard for the shock deterrents to get to their bodies. Put some bacon, chicken, fish or peanut butter on the energized wire to draw the attention of the skunk. This will shock the skunk as they attempts to sniff or lick the substance.

Setting hives up at least 18 inches or 3 feet off the ground. This keeps skunks from reaching the entrance. When the skunk stands on its hind legs this exposes its vulnerable underbelly to stings and can quickly become discouraged.

An aluminum guard is placed around the bases of hives to prevent the skunk from climbing even though, striped skunks don’t normally climb.

Draw a bunch of nails through a plank of plywood about two-feet square and placing it in front of the hive with the nail points pointing up. These should look like a bed of nails. This is a snare for skunks. Just be careful to remember the plank’s there when you go stomping around the hive.

Seal off any potential entry points to prevent skunks from digging dens. The most common areas where skunks may take refuge sheds, garages fences, holes and yard the most effective way to control is by denying them access. Build a good fence over your backyard. An electric fence would be quite efficient in keeping away skunks. A two-wire fence would be ideal, with one at least 4 to 6 inches off the ground and the second 12 inches. Fences should also go underground at least far enough to block access. Tree overhangs should also be removed. Skunks cannot climb well.

All skunks should be kept outside when erecting a fence. Keep out both young and adult skunks. You can also sprinkle some baking flour in the areas suspected to harbor skunks. These areas should then be checked for possible footprints. If footprints are not found then it would mean the skunks are already locked out. If you find the footprints the next day, then seal the entrance and open it for an hour the next day so that the skunks can leave the den.

Spread high nitrogenous fertilizer on the ground so that causes a burning sensation or effect to the skunks’ feet and its vulnerable under belly.

11. Use of homemade repellants

The above mentioned homemade skunk repellents are applied daily until the problem subsides. If the skunks vacate your yard, you can reduce on the number of applications slowly, and increasing when you suspect they are starting to creep back.

Beekeeping is a very crucial economic activity, though faced with many challenges. Skunks and other predators always pose a threat to bees and their beehives. Protection against these predators must be the first priority from the start to avoid losses. The beehive is to be designed in a way to incorporate the best defense mechanisms against predators. The yard should also be properly fenced to keep off huge predators.

Skunks are valuable fur bearers – they control grubs, mice and pests. However, they eat bees and damage beehives which causes economic loss. Also, their scent causes a nuisance around occupied buildings and a confusing effect on bees. The damage they cause is more widespread in distribution than bear damage, but also less severe and spectacular. Therefore, understanding habits and needs of skunks can prevent destruction of beehives and other unpleasant encounters. It can also help to formulate customized strategies to deal with skunks. One may use hydrogen peroxide or vinegar to remove the pungent odor from pets or clothing when sprayed by a skunk.