Honeybee brood simply refers to all stages of a honeybee, save the adult bee. Precisely, it comprises the egg, larva, and pupa. Honeybee brood is mainly found inside the beehive for domesticated bees. They are an important part of the colony since this is where the future of the colony is pegged. This is the future generation bees that will develop to be workers, drones, or the mother queen bee.

Together, the brood and adult bees with their segregated duties, make up a super force that functions as one. The thousands of individual honeybees that collectively exist mutually, make it possible to survive and thrive even in harsh environs. It is therefore important for the beekeeper to fully understand the working mechanism of a brood and colony as a whole. Without a deep understanding of colony functions, it proves impossible to manage or raise successful honeybee colonies. Therefore, analyzing brood comb is without a doubt an important part of beehive management. In this article, we’ll discuss how to identify and analyze brood comb.

What is Brood Comb and How to Identify It? 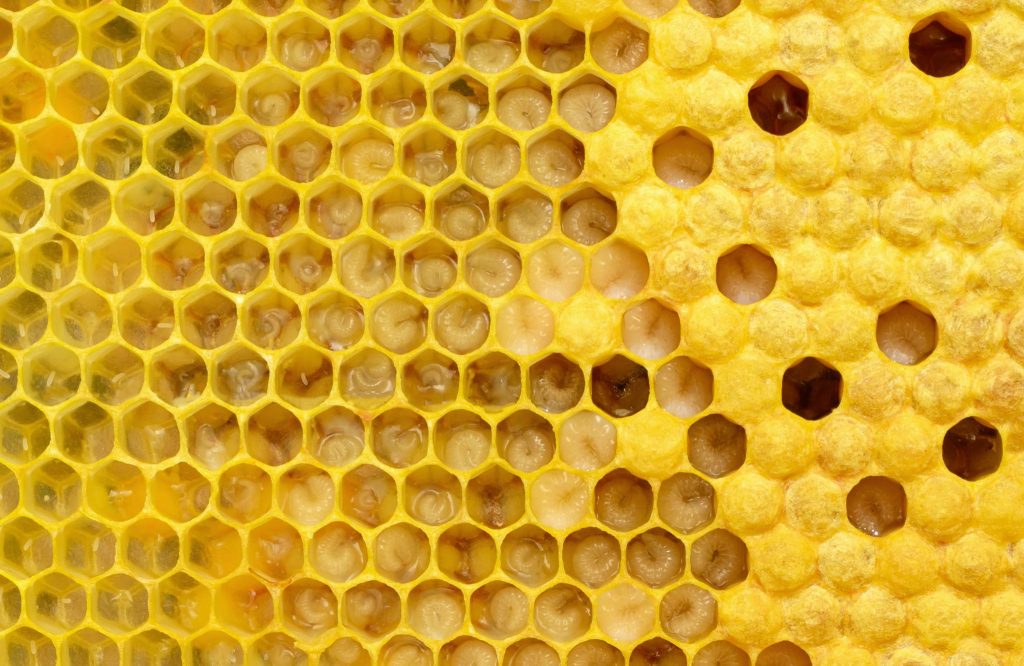 Simply put, the brood comb refers to cells of beeswax where the queen bee deposits her eggs. This is an important part of the honeybee colony where the future generation of a colony comes from.

Brood combs are built on the lower part of a beehive, unlike honeycombs that tend to be located in honey supers. Brood cells are cared for by the nurse bees, that is, young worker bees. These developing bees require specific temperature and humidity. It is thus the responsibility of the worker bees to maintain these conditions, otherwise the brood may die. In fact, the worker bees instinctively concentrate brood combs within one location to make their work much easier.

The brood combs comprises brood in various different stages of their life cycle. This includes egg, larva, and pupa. All honeybees undergo the three stages of development and have a short lifespan. It will take on average 16 days for a queen bee to develop from egg to adult. And for a worker and drone bee it takes 21 and 24 days respectively.

The queen bee lays a single egg in each of the cells in the brood comb, already cleaned and disinfected by the worker bees. Fertilized eggs give rise to worker bees and queen bees, but unfertilized eggs result in drones. Each of these eggs is extremely tiny and not easy to see with the naked eye. It takes some experience to see them and you might need a magnifying glass if you are a beginner.

Brood cells are selected by the queen almost at random. That is, she will lay an egg in any cell she chooses when she is free. This tendency is usually restricted by the beekeeper by installing a queen excluder.

Each of the cells with an egg will be filled with food by the worker bees. Once the egg is hatched, it will feed on this food and grow. Once the larva is big enough and is about to transform into a pupa, the worker bees will cap or seal off the cell using a translucent and papery substance. The larva shall then form its cocoon underneath, pupate and thereafter come out as a young bee. She will chew her way out of the cell.

Brood comb will look different depending on how long the combs have been in use. For instance, newly created brood combs have a white or light color. This will be used to raise the first generation of brood. Over subsequent years, the brood comb will change in color to yellow then darker appearance. These combs will be darker and darker over the years if they are recycled several times. In fact, brood combs that have been used for the longest time are usually black in color.

Other Types of Cells in the Brood Nest

The brood comb for worker bees and those of drone bees are different in appearance. The former tend to be uniform with the rest of comb cells, whereas cells for drone bees protrude from the comb since they are bigger.

Another common brood cell worth mentioning is the queen cell or combs. These are usually built whenever a need arises for a new queen bee. There are various trigger factors that lead to the formation of queen brood. An aging queen, sickened, or a queen just died will lead to the making of queen cell.

The sight of a capped queen cell should send a red flag to the beekeeper. This means your existing queen is about to swarm with half of your worker bees. It might also mean that the colony is preparing to move out. You should therefore respond accordingly when this happens to be the case.  A queen cell will look like a peanut and standout from the comb surface. 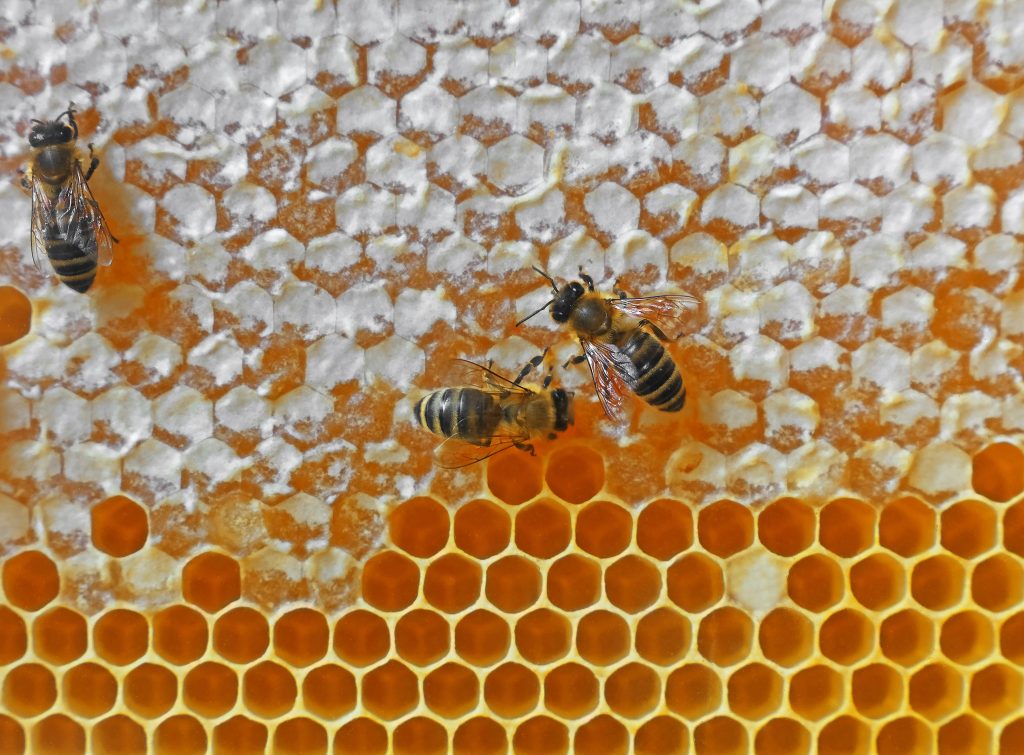 As explained earlier, the brood combs house the various stages of the honeybee. Honeycomb on the other hand refers to cells that are used as reservoirs for honey. The honeycombs together with wax provide insulation to the hive. The honeycombs are normally located above the brood cells to ensure the honey is within reach for the young bees.

Honeycombs can be defined as the hexagonally shaped cells that worker bees build and use for honey storage. These are usually harvested by the beekeeper then the honey extracted using a honey extractor. The combs subjected to honey extracting device are normally reusable. This improves the productivity of the honey bee colonies. Before honey is extracted, the capping is normally removed from the honeycombs using an uncapping tool.

Beekeepers have improved their efficiency over the years when it comes to the way honey is extracted. In fact, damaged combs are normally used for making foundation that will guide the honeybees when building combs. These foundations are hexagonal and smaller in size to encourage the bees to build worker cells instead of drone cells.

Honeycomb are of two types: capped and open cells. The open cells usually contain nectar that is not yet converted into honey. It can also contain honey that is not yet treated. Treated honey is usually found in sealed or capped honeycomb. The easiest way to find out if honey is treated and ready for use, is by turning the frame with honeycomb upside down. If the honey leaks then it means it is not yet treated by the worker bees and therefore not recommended for harvesting. It is still under processing and contains high water content.

Capped honeycombs can be found on the uppermost part of the frames. These are honey reserves for the colony and will sustain them during seasons of dearth. The capped combs cover the top and extend to the corners of the hive.

The absence of capped honey in any hive is a sign that your honeybees are in serious danger. This will mean the colony has a shortage of food and will need to be supplemented. At times this can happen even when it is least expected. For instance, a honeybee colony might run short of its food stores during summer because the foraging workers were unable to fly out due to bad weather.

The beekeeper should be much delighted at the sight of capped honeycombs, since these are the reward for all the hard work. Unfortunately, the honeybees do not store the honey for beekeeper’s consumption. The seasonal changes trigger the making and storage of honey. That is why it is important for beekeepers to not over-harvest, else they run the risk of starving the bees to death.

The process of making honey starts when foraging bees collect nectar from flowers and deposit it in the honey cells. This is transformed from nectar to honey through their fanning of wings, reducing the water content in the honey to about 20 percent or less. The honey cell is then capped to prevent any potential contamination. Honey with its low water content will never spoil or ferment.

Capped brood simply refers to cells with larva or baby bee underneath. The brood cell irrespective of whether it is for a queen, drone or worker bee, is usually capped once the larva has grown big and is about to pupate after gorging on the nutritious food supplied by nurse bees.

The worker bee usually uses a translucent or papery substance for sealing brood cells. Once this is done, the developing larva will spin a cocoon on itself, complete the pupa stage and then emerge as a young bee. A young worker bee chews its way out of the capped brood cell, unlike a drone and queen bees that are assisted by nurse bees.

The existence of capped queen cells imply the colony is about to swarm or it has already swarmed. You should therefore be on the lookout for any capped queen cells during hive inspection. The queen cells usually appear as a peanut shaped protrusion that is easy to see on the frame. The brood cells are usually utilized by the worker bees prior to winter in what is referred to “backfilling”. This means empty brood cells are filled up with honey to cushion the colony from the toll posed by winter. These cells also help contribute to the insulation of the hive.

Difference between Brood and Honey Cells

Brood and honey cells are easily distinguishable once you understand how either appears.

The main differences between the brood and honey cells are outlined below:

Brood cells patterns vary depending on the type of bee that is maturing underneath. For instance, a worker bee brood cell is completely flat and in line with the rest of the comb cells. They are yellow capped cells usually occupying middle to the bottom of any comb. Worker cells with light yellow appearance mean these have recently been laid by the queen bee. Drone and queen cells on the other hand are raised and protrude from the comb surface unlike the rest of the cells. They are much bigger and appear to bulge from the comb surface. 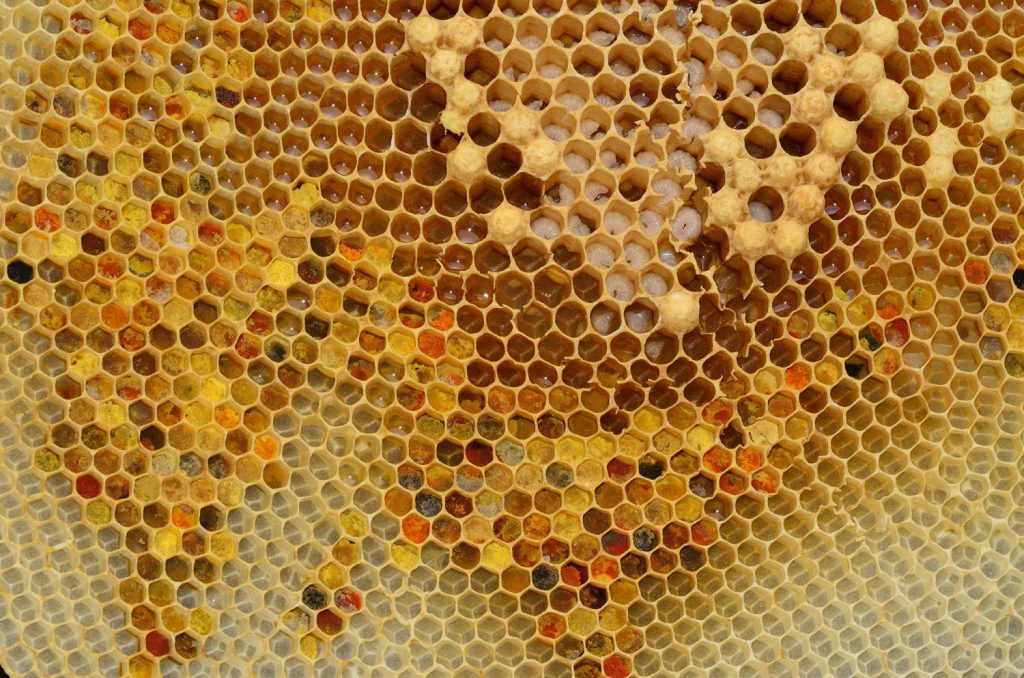 The brood combs comprise a patch of cells that are circular and highly dense. This will mainly house eggs, larvae, or capped brood. All these will depend on how long the queen bee has been active within the frame area. Any abnormal pattern of the brood will mean something is wrong either with the queen or the larvae.

Some of the signs to look out for on a healthy brood include:

Abnormal brood patterns include the following:

Honeybees will utilize the frames when building brood combs and it is important for the beekeeper to comprehend the different types and patterns of brood and combs. Sickened brood combs are easy to decipher for an experienced or knowledgeable beekeeper. Likewise, it gives you a peace mind to know that your brood combs are healthy based on your evaluation during routine inspections.

A healthy brood comb is characterized by a reasonably solid foundation pattern across the frame. Any anomaly that could be spots across the foundation is a red flag, possibly suggesting diseased brood. The honey and pollen brood also exhibit a common pattern when healthy and same applies to the brood cell capping as explained earlier. Any abnormality in the brood combs should be responded to with urgency since failure to respond may lead to colony loses such as a die-out of the future generation of bees. Diseases may even spread to adult bees which could be fatal.