Mason bees are natural pollinators in many ecosystems. Learning about the mason bee life cycle is important so that you know how to benefit as much as possible from these bees. They are the native bees of North America, including the USA. Various developments have led to an increasing interest in mason bees, particularly the decline in honeybee populations across the USA and the world.

Mason bees are an important pollinator, and are useful in filling pollination gaps that might arise from time to time as we look for solutions to the challenges facing honeybee populations. There are more than 300 species of bees in the genus Osmia that can be referred to as mason bees. A distinction in popular use is, however, emerging with the name ‘Mason Bee’ being used to refer to the Osmia bees that use mud, and other soil-based materials to make some or all of their nests. Those that use plant-based materials such as flower petals and leaves are now generally referred to as leafcutter bees.

In this article, we generally look at the Osmia species that use mud and soil-based materials in their nests and emerge in early spring season. Even then, the life cycle of these mason bees do not have any wide variance from that of leafcutter bees. Only a few differences exist between the life cycles of mason bees and leafcutter bees such as the choice of nest materials, the preferred diameter of holes for nesting, and the season of emergence and major pollination activity. 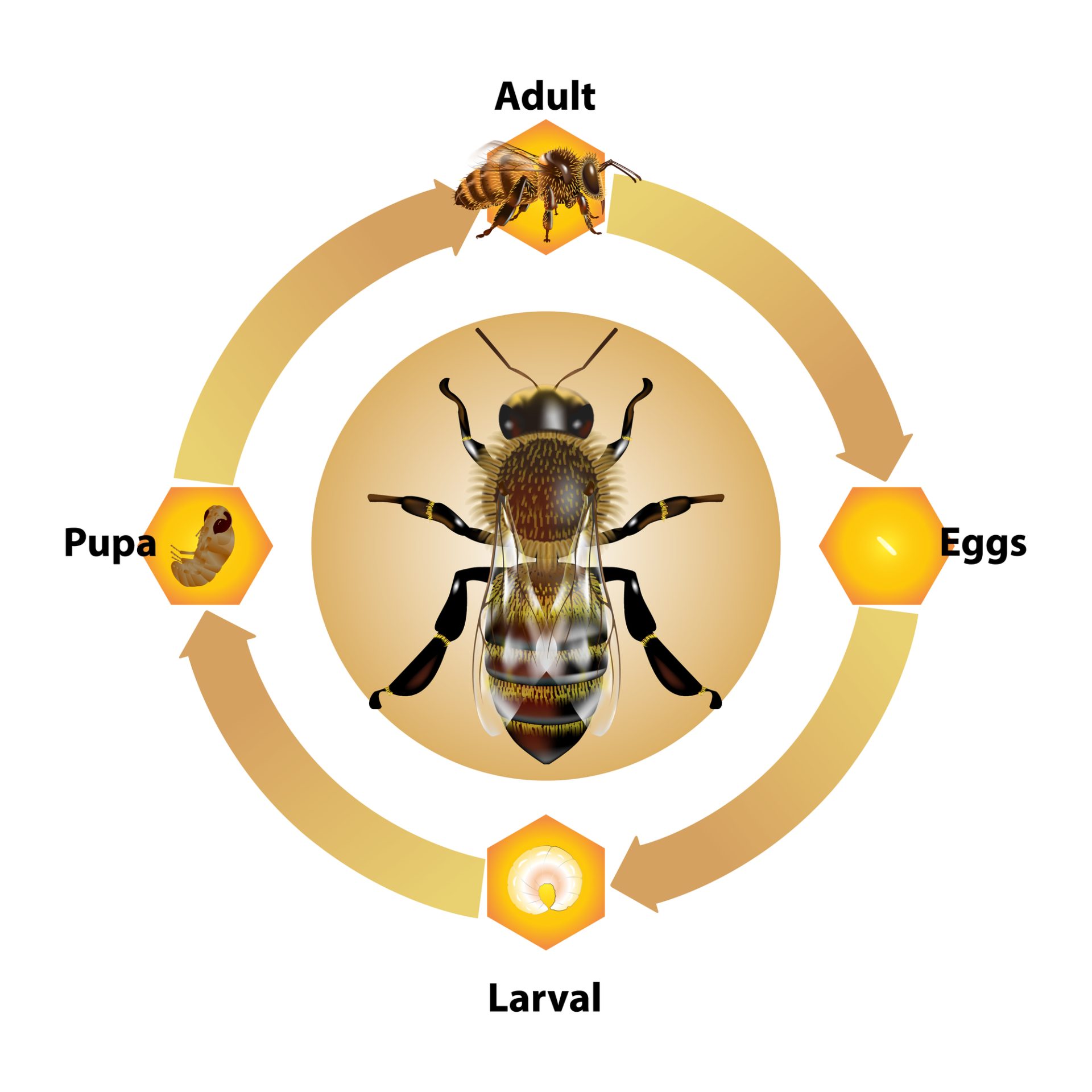 Mason bees do not shed their exoskeletons (do not undergo ecdysis) once they emerge from their cocoon having reached the adult stage.

A mason bee has three distinct body parts: head, thorax and abdomen. On the head, there are two large compound eyes, three small ocelli, a mouth and antennae. The thorax holds four wings and six legs. On Osmia females, there is a scopa underneath the abdomen for collecting females. The scopa is absent in male mason bees.

Each mason bee egg is laid in a pollen bed. Adult female mason bees collect the pollen from various sources and deposit it into a nest cell. They lay the egg on the pollen and then seal the nest. Some mason bees may line the nest with nesting material such as mud. After some time, the egg hatches and releases a larva in the pollen bed.

There are many mason bee species in the USA in regions that see temperatures drop to below 00C (320F) for significant periods of time. They have adaptation to the cold and even seem to require chilling for proper development and maturation.

When the development of the mason bee pupae is complete, adults emerge from their respective cocoons. This happens in early spring season. Often, males emerge first and get used to their environment while firming up their wings. They drink nectar from early spring flowers and wait 3-5 days for the female mason bees to emerge. When the females emerge from their cocoons and nesting tubes, the males mate with them.

Some male mason bees have been observed extracting females from their cocoons and then mating with them. Male mason bees die a week or two after they have mated with females. This leaves the female bees as the larger population of mason bees in the ecosystem. After mating, female mason bees decide on where they will make their nests and start collecting materials for nest-making.

The adult female mason bee is the active one in nest-making and, therefore, pollination. It inadvertently pollinates flowers of plants during its activities collecting pollen for its nest cells. Female mason bees additionally engage in other activities of interest to farmers, agriculturalists, researchers and humans at large. This is because the effects of mason bee activities impact entire ecosystems.

Bees and insects are sometimes described based on their preference to work in teams or not. Mason bees are solitary. They do not cooperate on any life activities and have no known method of communicating. They can thus not signal each other even when there is danger such as the presence of predators. There is documentation, however, of the use of pheromones to inform succeeding generations about the best nesting sites for mason bees. This sees mason bees of the current generation preferring to nest in the same spaces where previous generations of mason bees nested.

All female mason bees are fertile. Each female makes her own nest independent of neighboring mason bee females and their nests. There is no worker bee class in mason bees and other Osmia bees.

Deciding where to nest is a one-time event for female mason bees. Once the female mason bee has decided where her nest will be, she will rarely go back to choosing a second site in her lifetime. Most mason bees make nests in the same nesting area that they emerged from. Typically, mason bees make nests in tubular cavities that are naturally occurring, narrow gaps and other hollows such as the abandoned nests of suitably sized wood-boring beetles and carpenter bees.

There is clear preference by mason bees to nesting in plant material such as wood, twigs and reeds. If a mason bee cannot find a suitable hollow in plant material for nesting, it makes use of any other available hollow that is of the suitable size. Mason bee nests have thus been found in all sorts of materials including snail shells, metal pipes and plastic tubes among others.

Mason bees use different materials to build their nests and create optimum conditions for the survival of their eggs, larvae and pupae. Wet mud is the preferred material for mason bees, thus the ‘Mason’ name. Some types of bees in the Osmia genus use leaves and flower petals as the main material of their nests and only a little or no mud for the outer surfaces of their nest cells. These are subsequently popularly referred to as leafcutter bees.

How Mason Bees Build Their Nests 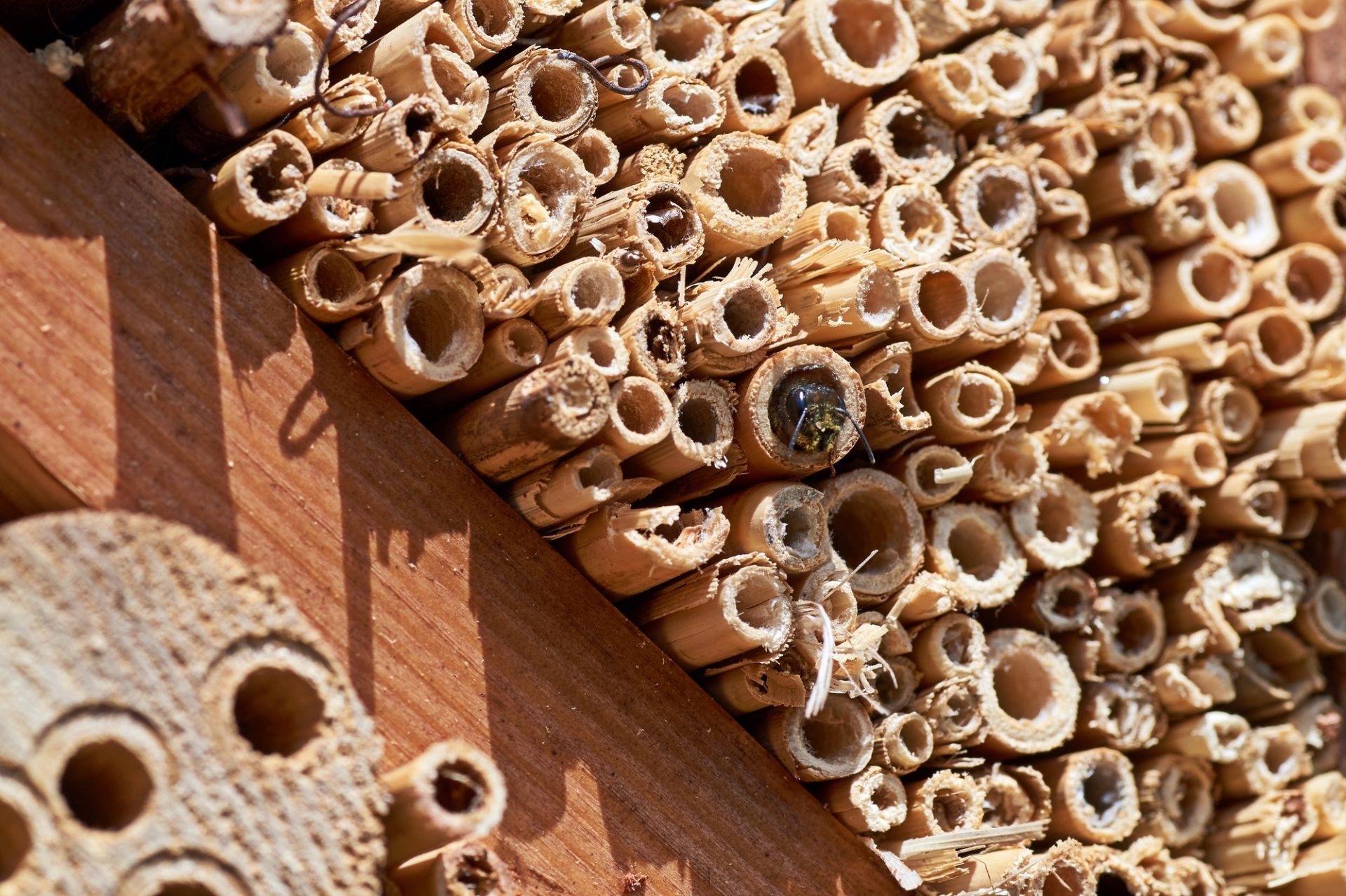 A mason bee nest is intriguing and comes from skillful building by the female bees of the species. They collect mud for making the nests using their mouths and fly it to the nesting area. In the nesting area, the mason bees wet the mud using their saliva and put it in place.

All mason bee nest cells are of the same size and ovoid shape. Each nest cell is roughly the same size as an adult mason bee. Mason bees shape the mud using their mouths. This is repeated during the entire time that the mason bee is building nesting cells. It builds each nesting cell to near completion and then stops for some time to collect pollen and nectar.

The female mason bee puts pollen and nectar into the cell until it has accumulated enough of this food to feed a larva. It then lays a single egg on top of the pollen bed that it has made. With enough pollen and nectar stored and an egg in the individual cell, the female mason bee now closes up the cell using mud. It then starts building the walls of the next cell in the series. The front end of one nest cell forms the rear end of the next nest cell in progression towards the entrance of the nesting space.

How Many Nests Does a Mason Bee Make?

Nesting cell construction in the mason bee life cycle continues until the mason bee dies. If it fills the nesting space it first chose, the bee plugs the entrance of the nest and moves on to building another nest in another suitable space. In mason beekeeping, the mason bee starts work on a second nesting tube if it fills the first nesting tube. Female mason bees live for 4-6 weeks before they die. This is the same average lifespan for all bees, except the queen bees in honeybee colonies. 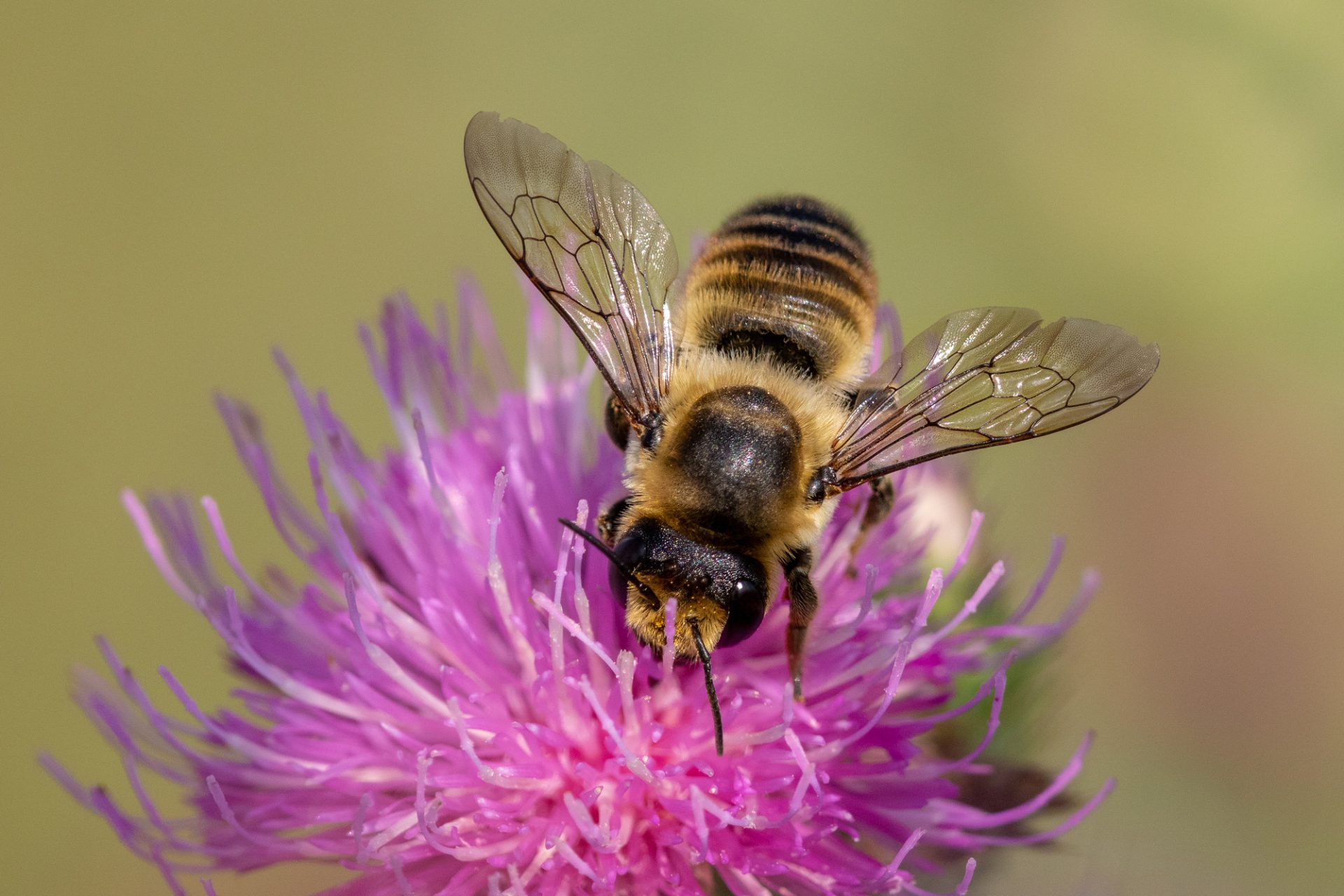 Mason bees have ventral scopae that hold pollen which the bee then flies to its nesting site. Most ventral scopae are black in color except on a few Osmia species. Each female mason bee makes many trips for her to fill just a single nest cell with pollen and nectar. Once she has completed making an adequate pollen and nectar provision mass, she will back into the nesting cell and lay a single egg on the pollen bed. This is followed by the closing of the cell using some mud.

Pollination by mason bees is very effective. Mason bees are efficient pollinators because they use scopa on their abdomens. These scopae have many hairs around them. Pollen often falls from the scopae onto the stigma of flowers. Mason bees perform pollination in nearly all flower visits except in very few flower visits. They are valuable pollinators due to this anatomy and behavior. It has led to farmers engaging in mason beekeeping where they manage populations of one or more species of mason bees.

Due to their emergence in early spring, mason bees are the dominant pollinators for early spring flowers. Mason bees forage even in poor weather conditions, further increasing their effectiveness and efficiency as pollinators.

Mason bees are immune from Varroa and acarine mites. They, however, still do have various pests, diseases and parasites that harm them. Additionally, there are fungi that cause infection and death of mason bees in the larva or pupa stages of development. Lastly, there are a few species of birds that predate on mason bees in their larval, pupal or adult forms. 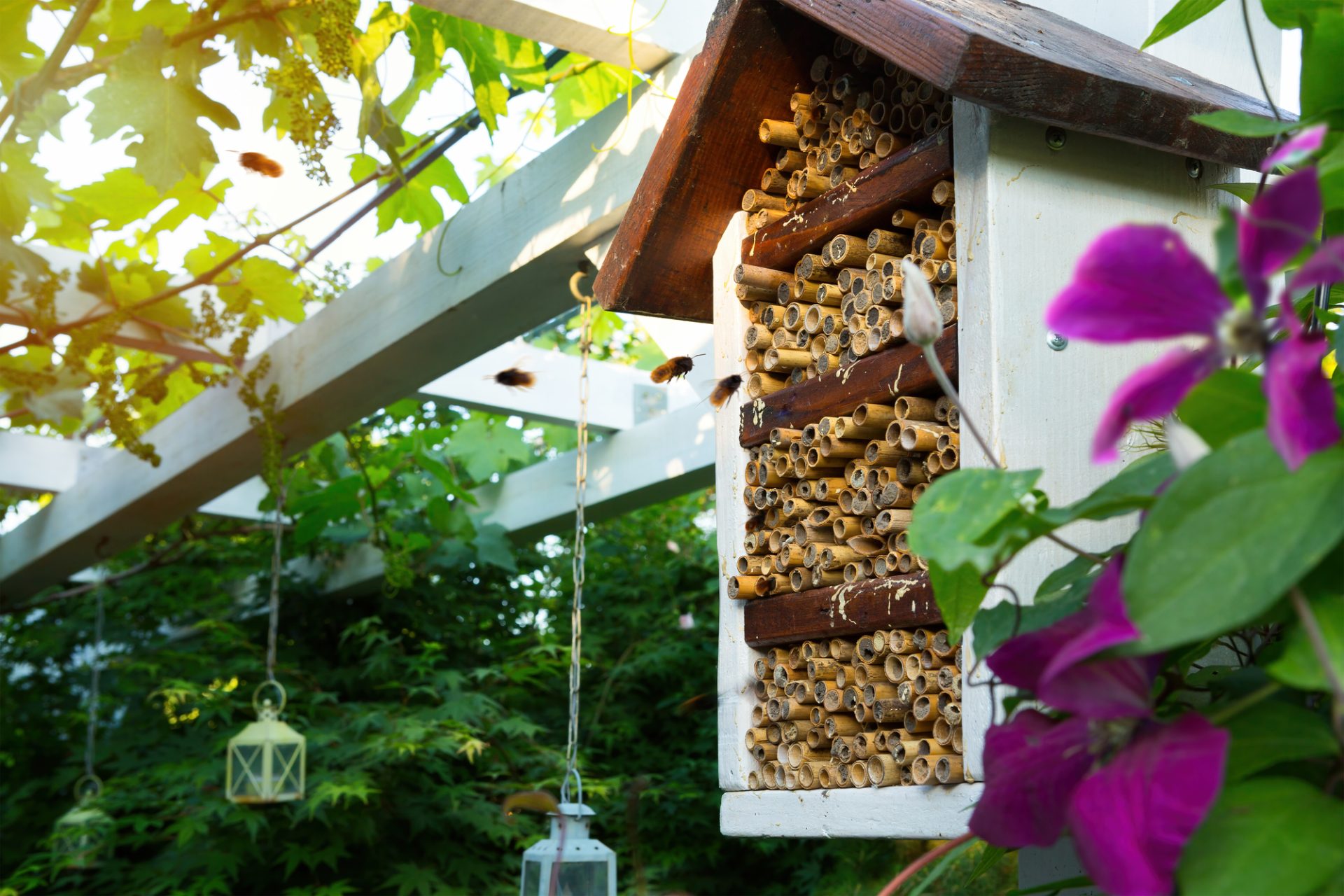 You can transport and propagate mason bees when they are in their cocoon form during the pupal stage of development. To start a population of mason bees going, you place the cocoons into the new nesting place that you have selected and prepared for the mason bees. When the mason bees emerge from their cocoons, they have preference to set up a nest in the space in which they emerged if it is suitable for their nests.

Mason bees are not aggressive, but they can sting you and animals. Despite their docility, they turn defensive when squeezed, when wet, and any other time when they feel threatened. Handling adult mason bees with your bare hands is not safe if you are inexperienced. The mason bee sting is not painful; the stinger is small and the does not have barbs.

Management, transportation of mason bees, and mason beekeeping in general needs careful attention to safety, hygiene and ethical practices to prevent the spread of mason bee diseases, pests and parasites. Additionally, you should take into account the possibility of applying pressure on other native bees and pollinators before you introduce new mason bee populations into an ecosystem.

Pollination of plant flowers is important for food production and fertilization which gives seeds and other benefits to both the plants and humans. Agriculture requires pollination to happen in a reliable and efficient manner for best crop yields. Various challenges in plant pollination have caused farmers to turn to mason bees and even engage in mason beekeeping.

Mason bees are great at complementing honeybees in pollination. They can also fill the gaps left by declining populations of honeybees where needed. Mason bees are native to the USA and North American continent. Apply the lessons from your learning about the mason bee life cycle to profitable ends and in making environments better for mason bees.

Share
Previous How to Make an Ant Proof Beehive Stand
Next What is the Kashmir Bee Virus (KBV)?