Of all the insects in existence, bees are some of the most organized, territorial, and valuable. They are organized in colonies that are self-sufficient and self-propagating. The honey bee colony in particular is well-known for its effective defense against disease. Bees have a superior immune system, one that can be compared to that of vertebrate animals. They also do an excellent job of defending the hive against invaders through impenetrable walls built on hive crevices and openings. Bees will also physically remove parasites and other pathogenic agents from the hive. Another defense mechanism employed by the bee colony is the use of propolis to cover huge invaders which have died in the hive. However, despite this self-defense mechanism, they are still prone to honey bee diseases.

The Importance of a Healthy Bee Colony

Every beekeeper strives to keep a healthy and productive bee colony for a good reason. Healthy and productive bees are easier to maintain and are highly profitable. Therefore, to achieve this, the frequency and prevalence of disease should be reduced. As a summary, we present a table with some of the common bee diseases, causes, and signs. Further below the article we present a summary of the most common honey bee diseases.

The American Foulbrood (AFB) is the most common bacterial disease affecting honey bees globally; needless to say it is the most destructive. It is prevalent in temperate and sub-tropical regions, that is, regions where there is abundant sunlight and where temperatures are high all through the year. It is a contagious disease and the pathogenic bacterium remains dormant for up to 50 years. American Foulbrood is a disease that affects the queen, drone, and even the worker bee larvae. The adult bees are resistant to the disease. The disease takes two forms: vegetative form or spores.

Some of the symptoms of American Foulbrood include: sealed and unsealed brood cells that are scattered and irregular. A healthy brood cell is compact and well arranged. Dead larvae and pupae is also another sign of the AFB disease.

To control this disease a wide variety of techniques are employed. One is the inspection and complete removal of infected foulbrood and hive materials. A poisonous gas is normally used to kill the bees, for instance, sulphur powder. Thereafter the entire bee colony and hive materials are collected and dumped on a hole then burned using kerosene. This method is quite costly given the materials required for destruction. As second remedy for AFB is the direct artificial swarm method. Others include the use of chemicals.

The name of this bee disease is quite misleading since it is not confined to Europe alone. In terms of prevalence this disease is less virulent when compared to AFB. Some of its symptoms include dead larvae. Five to four day old larvae die within the bee colony. This disease is regarded as a stress disease in the honey bee colony. It occurs mostly during spring and early summer and does not manifest as spores. The disease can be acquired via contaminated brood food and can spread rapidly within no time around the gut of the larva. Scattered pattern of unsealed and sealed brood is also another sign of the disease.

To control the disease, one has to consider how severe it is. Weak infection requires stimulation of the bee colony. Feed the bees with honey or sugar water and they will be stimulated to improve the hygiene within the hive. A spray of the honey combs with honey solution also works where the infection is weak. In case the infection is extreme, the infested brood combs should be removed so as to reduce the pathogens. Requeening also helps prevent the spread of the European foulbrood.

This is never considered a serious honey bee disease. It is however a problem is some countries such as Japan. The disease is caused by spore-forming fungus and usually affects the queen larvae, worker, and drone. The systematic disease begins when the fungus is ingested through the larval food. Spores develop in the bee larva’s hind gut. The vegetative growth remains dormant until the larvae are sealed in the cells. Later on, about 6 to 7 days from the day of sealing, mycelia bursts out of the gut walls and feast on the larval tissues for a period of 2 to 3 days, completely dominating the entire larva.

One of the symptoms of the Chalkbrood disease is the swelling of the dead larvae and a whitish mycelia covers the larvae. In severe infestation the sealed broods die and is dried up within the cell.  Furthermore, infested combs make a rattling sound.

The main remedy for this disease is the hygienic behavior of the bees where the infested brood is removed by the bees. As the beekeeper stimulate the hygienic behavior of the bees by changing the brood rearing conditions. The hive size should also be perfectly fitting to the strength of the bee colony. The hive should also be well ventilated. This disease has no chemical control measures.

Viral diseases are common in honey bees. They are widespread and differ in nature. They also cause a varying level of damage depending on factors such as; weather conditions, type of virus, the strength of a colony, and the strain of virus in question. The natural chitin body shell and gut coating of bees protects them against any infection. However, parasites that can penetrate the skin increase the bee’s susceptibility to infections.

This is a well-known viral disease of honey bees. The disease was first discovered in Thailand in the year 1981. Currently it is spread across most countries globally. Reliable researches have even proven that the major distributors of the disease are the nurse bees.  The young larvae get the disease through the worker bees’ brood-food gland secretions. The disease is prevalent during brood-rearing season and may not be noticed easily since it only affects a tiny percentage of the brood.

The Sacbrood disease is easy to notice once it has manifested. Disease larvae normally fail to pupate after 4 days. Instead, it remains within the cells with its head and thorax changing color. The color changes first off starts with white, then pale yellow, and eventually turn to dark brown. The skin of the larvae also toughens and its contents become watery. After a while the larvae dries out and remains loosely attached to the cell floor.

Sacrood disease has no chemical treatments. The bee colony normally recovers on its own. However, the beekeeper can help prevent or fight it by stimulating behavioral hygiene in the bee colony. The disease is more prevalent during stress periods such as food shortages, lack of food storage space, unhygienic hive conditions within the hive, other disease infestation and unbearable climatic conditions. One advantage that bees offer with regard to this disease is the fact that they can detect infected larvae quickly and remove them from the beehive.

This disease destroys adult bees, worker bees, drones, and even queens. It cripples the worker bees and they will be seen crawling and trembling within the entrance to the hive. It shortens the lifespan of the bees and tremendously weakens the strength of a bee colony. The Nosema spores are usually transmitted through water or food ingested by the honey bee. These spores develop and spread rapidly within the mid-gut of the bee. Plenty of these spores are released into the digestive tract for further elimination through fecal matter.

The symptoms of the disease are not easily visible unless the situation is extreme. Notable signs include swelling of the abdomen of infected bees and use of lab tests to identify some of its signs. To prevent the disease keep the colony healthy and ensure the bees are never stressed. The apiary should also be well ventilated. Honeycombs should also be changed after every two years.

This disease affects adult bees and is caused by viruses. It is caused mainly by two common viruses: Acute Bee Paralysis Virus (APV) and Chronic Bee Paralysis Virus (CPV). Bees might also suffer from paralysis as a result of a number of factors, namely: fermented pollen consumed by the bees, pollen from certain plants such as laurel, buttercup, certain species of basswood, or rhododendron. Lack of pollen during brood rearing period also causes paralysis in the honey bee colony.

This is mainly caused by viruses or varroa mites or a combination of the two. The bee larvae affected by this disease die at the prepupal or larval stage. The brood stretch out within the cells and their heads become slightly raised. Early stages of this disease can be identified by the white and dull deflated brood.

This is not a disease in itself but it is a common occurrence in beekeeping at end of winter months. It refers to hives that have experienced the death of an entire bee colony. This is quite frustrating and expensive to handle given the kind of hard work that is devoted to building a bee colony. Conversely, if a dead out does not occur, the huge potential the bee colony has is invaluable. You can split hives, re-queen, or even manage the colony so as to produce huge honey reserves. Nonetheless, the instance that dead outs occur serves as a learning point to the beekeeper. The main cause of a hive dead-out is wide and diverse. They are easy to identify and therefore an understanding of dead-out causes and signs can help the beekeeper alter his or her practices so as to minimize the frequency of dead-outs in the future.

Winter time is the season to check for signs of dead-outs and it seems daunting to do so since at this time temperatures are extremely low and bees do not leave the hive unless necessary. Therefore you first begin by evaluating the hive entrance. Check out the ground near the entrance to the beehive. If you see fresh dead bees it means that the hive is still alive.

You should also listen carefully to the hive for any humming sound. If unable to hear any buzz or sound it is time to wear the veil and open the lid. Check out for live bees and bring your ears close to the top bar to find out whether you can hear a buzzing sound. The bees might respond abruptly meaning the bee colony is alive. The removal of dead bees from the entrance also indicates that the bee colony is alive. You should also check the honey stores now that you have opened the beehive. If the bees require supplements then avail the emergency feed.

In the worst case scenario, you might find out that there is a dead-out. Do not allow grief to overwhelm you given the amount of effort and finances devoted to building such a colony. Instead, take your focus to the surviving hives and try to evaluate the root causes of the die-out.  You can try to compare the hive conditions of the surviving and the dead ones. You will learn a lot which can help prevent this from happening in the future.

Some of the things to check for after a die-out include the following:

How to Keep off Pests and Diseases 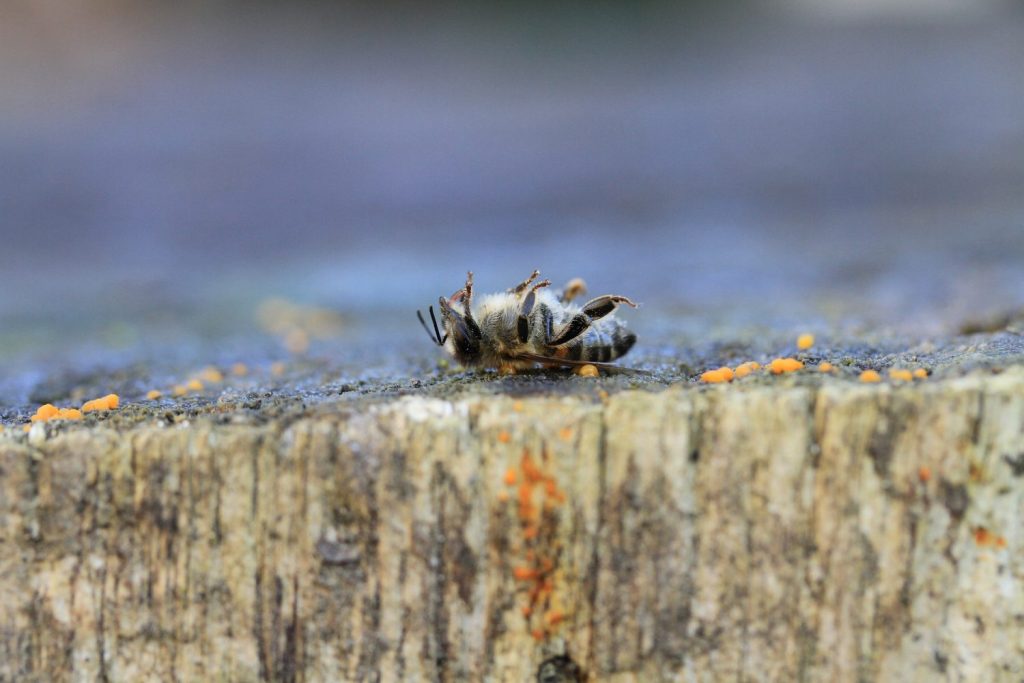 Keep pests and diseases away from your bee colony through the following:

Use a Queen Excluder

Take Care of Your Bees

Every beekeeper should be on the lookout of the tell-tale signs of bee diseases. If not careful, one may end up losing an entire colony of bees. Always maintain a clean and well ventilated hive and feed the bees well. Behavioral manipulation is one of the best ways of preventing and fighting most bee diseases.