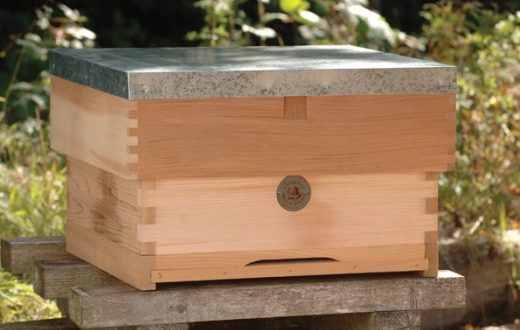 Introduction to the Smith Beehive

Modern beehives such as the Smith Beehive are designed with the honeybees in mind. It tries to mitigate some serious threats to honeybee colonies such as colony collapse disorder. This is a common occurrence globally that results in death of bees. Beekeepers try as much as possible to mitigate any predisposing factors that can result in colony collapse. And this can explain why most beekeepers prefer modern beehives, instead of older designs that do not provide a favorable home for honeybees.

As the name suggests, Smith beehives derive the name from a reputed Scottish beekeeper whose name was Willie Smith. He is regarded as Scotland’s first commercial beekeeper. Other authoritative sources regard Willie Smith Scotland’s greatest beekeeper.

The advent of the Smith Beehives is linked to Willie Smith’s desire for an inexpensive and small beehive that could meet his needs and successfully raise native bees. Furthermore, such a hive could still offer the benefits of an American Langstroth hive. This was the motive behind the advent of the Smith Beehive. There was no such hive at the time and thus Smith set out to design one in 1928.

Willie Smith designed a beehive using the British standard frame. However, he used a very short lug and top bee space. This resulted in the simple hive, made up of brood boxes and supers finished using 4 boards. It is worth mentioning the fact that Willie Smith made most of his beehives. More so, he came up with other hive accessories such as comb cutter/scraper.

Interestingly, Willie Smith owned and managed more than 250 honeybee colonies. All these he managed on his own and apiculture was his main source of sustenance.

Willie Smith passed on in 1969 and Gorge Hood took over his colonies. The latter ails from East Lothian. Smith definitely made a huge impact in the beekeeping industry. He remains a legend and will be remembered for his efforts in making beekeeping easier and more rewarding.

It is important to note that the Smith beehive was specially designed by a resident of Scotland. That nevertheless does not mean the hive will not be suitable for other locations. Scotland is ideally cool and wet, and is hugely affected by the North Atlantic drift, the warm sea current from the Caribbean that keep Scotland’s coast ice free during winter unlike the West. This results in drier weather, more sun during summer and colder winter months.

During summer, beehives are cooled and conversely heated during winter by the bees themselves. The honeybees thus use a lot of their energy to keep the temperature within desirable levels. Regions such as the United States, favor large beehives since prevailing temperatures are relatively moderate. Unfortunately, parts such as the U.K experience more severe winter months. Therefore, the British beehive tends to be a bit smaller. This design allows the bees to use less heat during winter.

Scotland, for instance, experiences severe winter months which can lead to the bees freezing when temperatures are very low. Furthermore, the bees use up a lot of energy to maintain warmth even on moderately sized hives. The Smith beehive therefore makes the task of warming the hive much easier during the winter due to its compact size. Ultimately, the beekeeper obtains healthier and well rested honeybees at onset of spring.

Small sized beehives such as the Smith hive also benefits Scottish beekeepers. It allows the beekeepers in Scotland to keep the bees close to the nectar and pollen, by moving the beehives directly to the sources of nectar and pollen. This substantially minimizes the distances honeybees need to move when foraging.

The bottom line is that Smith beehives minimize the strain on the honeybees when temperatures are extremely low. The hives are also least straining to Scottish beekeepers. since they are easy to move from one area to another. The Smith beehive is much smaller than any other hive and is very portable.

Commercial beekeepers place an important role and are part of a much bigger system. Major industries served by beekeepers include: agriculture, retail sector, consumer market, and the food industry.

Most of the hives used by most commercial beekeepers feature drawers, precisely measured and fitted to allow the honeybees build a honey comb within each of the drawer. Langstroth hives have these specially designed drawers and are perhaps the most popular type of beehive. Other commercial beehives such as the British National, Dadant and Smith hives, mimic the Langstroth, hence they have Langstroth-style drawers. However, each hive design is different to meet the varying needs beekeepers.

The Smith beehive is common among beekeepers throughout Scotland. It is single-walled and similar, often appearing as a shorter version of the British National beehive. The size is its defining feature.

A top space is one of the signature features of the Smith beehive. It plays an important role of eliminating any possibility of crushing or killing the bees during routine inspection or honey harvesting. Consequently, it makes it so much easier for the beekeeper to check on the bees. Harvesting of honey also becomes so much easier.

Other Advantages of the Smith Beehive

The minimalistic design of the Smith beehive makes it an excellent choice for beekeepers that plan to move their bees around. It easily fits into the back of a SWB Land Rover Defender or similar modes of transportation.

Some of the advantages of the Smith beehive include:

There are two types of hives: the traditional hive and modern hive. Traditional hives boast the simplest design and can be merely an enclosure without any special interior modifications. These hives are normally made of clay or tiles. Traditional hives exploited the honeybees, mainly focusing on honey production for consumption with least care for bee’s welfare.

Traditional hives were quite simple in design. It consisted of a basket placed with its open end downwards. It is then sealed using mud or clay. These hives were common throughout Europe. The hives had a design similar to what we currently see in modern hives. However, such hives have been banned in other parts of the world such as the US.

Another popular traditional hive is the use of hollowed-out tree-trunks. This is common in some parts of Africa and might not be ideal for commercial beekeepers given its low productivity.

One of the most common, widely used and movable modern hives is the Smith Beehive and the British National beehive. The hive is lightweight to allow beekeepers to move it around with ease. The Smith beehive also has a top space that prevents congestion of wax, thus minimizing death of bees.

The modern hives generally consist of:

The modern beehive is portable since it is light and can therefore be moved from one area to another with ease depending on the interest of the beekeeper.

The modern beehives have excellent designs that safeguard the honeybees from getting crushed or killed during routine inspection or honey harvesting. Thus this leads to more bees which directly contribute to more production of honey.

The modern bee hives can be easily inspected daily by removing the brood frame and inspecting the hive thoroughly. Inspection of hive is important since it helps the farmer identify the presence or absence of pests and diseases.

The swarming of bees can be easily controlled by providing adequate brood space and prevent overcrowding. Modern hives provide all of that.

The hives are quite sturdy and durable since they are made of high quality wood such as soft wood like pine and cedar.

A Bit about Bees

Bees are closely related to ants and wasps. These flying insects are best known for honey production and pollination services. One of the well known species of honeybees is the western honeybee. It is the top domesticated honeybee producing honey.

Interestingly, bees can be found everywhere in the world, with an exception of Antarctica. It basically survives and thrives anywhere you can find pollinated flowering plants.

The helictidae are the most common bees, also called the sweet bees. These bees are extremely small and are often mistaken for wasps or flies. Besides the very tiny bee, you will also find stingless bee species that are popular among beekeepers. The tiny bees can be less than 2 millimeters (0.08) in length. Nonetheless, bigger bees such as the megachilie luto can attain size of 37-38 millimeters, and are regarded as the largest species bees.

Nectar and pollen are the main food for bees. Nectar is the main energy source and pollen provides protein and essential nutrients. Pollen is primarily the bee larvae food.

Most bees are regarded as eusocial, that is, they live in organized groups referred to as colonies, with a colony comprising a queen and the bees.

Honeybees are one of a kind, predominantly recognized for their building of perennial nests using wax, big colonies, surplus honey production and accumulation of honey.

There are about 8 known surviving species of honeybees. These have approximately 43 subspecies. Historically, there are about 7-11 species of bees recognized and the honeybee forms a small fraction of the bee species.

The western honeybee is perhaps the most popular species, having been domesticated primarily for honey and pollination. The other popular strain is the Eastern honey bee found in the South Asia. Many other types of honeybees are kept for pollination purposes.

It is believed that honeybee’s original habitats were heavily forested regions. Yet, honeybees thrive in well domesticated environs, as long as there are plenty of flowering plants.

The honeybees are quite unique when compared to other sub species of bees. They instinctively store a lot of honey and thus require favorable conditions that foster their activity. The Smith beehive is well-designed to cater for honeybee requirements. It is one of the hives that provides the desired condition honey production and storage. The Smith beehive can be positioned close to the flowers, so that the bees can easily access the nectar and pollen. This also helps conserve energy that would have been used for moving through large distances. Instead this can be channelled to other productive tasks within the colony.

The Smith beehive is design is minimalistic or compact, making the task of bees during the winter season much easier. This leads to a much healthier and energetic honey thus leading to production of quality honey.

Going by what we have discussed thus far, the Smith beehive is evidentially a recommended choice for any beekeeper, more so, for anyone with a plan join the field. Apiculture is the main source of income to many beekeepers globally and many designs of beehives allow beekeepers to succeed. The Smith beehive is an ideal choice since it is portable making transportation a breeze. It is one of the best choices for commercial beekeeping.