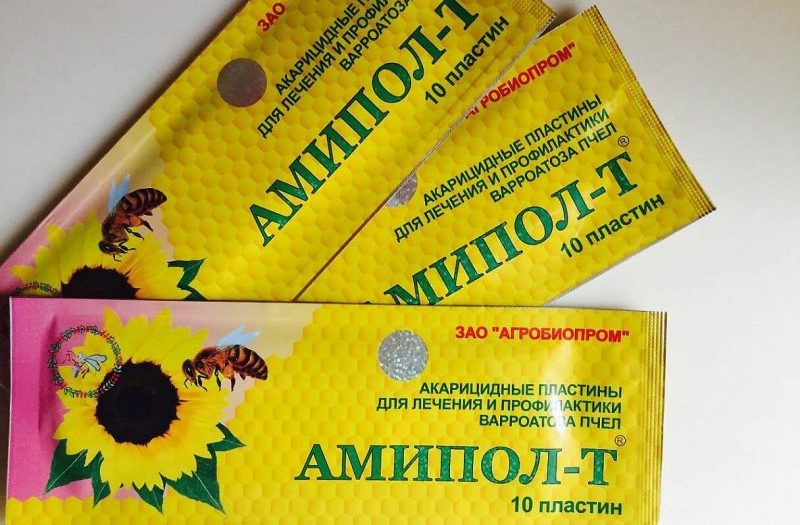 May 17, 2022 Bee Pest and Parasite Treatments Leave a comment

The Amipol T Prevention of Varroosis is a treatment measure that works. The primary ingredients in the product make it possible to wipe out the harmful mites. The package comes in two options for your choice: 2 and 5 packs. Both boast the same ingredients and will work as expected.

Amipol T is available in packs of 20 and 50 strips which are formulated specifically to target the varroa mites. It works as an acaricidal chemical that is distributed through contact action. Each of the strips is made up of thymol and amitraz as the primary ingredients. These are ideally made of veneer with dimensions of 200 x 20 x 1mm in size. The strips have been immersed in solution of thymol and amitraz.

Amitraz is a product that paralyses the varroa mites instead of killing the mites directly. The affected mites fall off the honey bee bodies and starve to death. This ingredient is distributed from one bee to the other through contact.

This method of mite control can be combined with biotechnical method such as cutting out of brood. This will guarantee better results. Varroa mites target the drone brood and thus an empty brood frame placed on the edges of the brood chamber can help trap and cut off the mites. The drone combs can also be removed from parent colony and then broodless colonies are treated with the product. Artificial swarming will also work whereby a portion of adult bees are taken away from the bee colony. The young colony that remains is then treated.

The treatment of varroosis using Amipol T strips should be carried out at the right time. Summer and autumn months are the best for treatment when all honey intended for consumption has been pumped out from the hive. During spring, treat the hive after your first inspection has been completed.

The recommended rate of using these strips is 2 for every 10 to 12 nesting frames. 1 strip is enough for small bee colonies or those with 6 frames. This should be strategically positioned inside the hive, preferably in the middle of the nest.

These strips need to be securely attached to the hive and thus you will need a suitable hanging device which could be a small nail, staple, or pin. The strip should be firm enough and should lie at the centre of two frames. It should be positioned vertically between 3 and 4 frames in small colonies. As for strong colonies, place the first strip between 3 and 4 frames and the second between 7 and 8 frames.

Amipol T strips will work for a period of between 3 to 30 days and that means you need to evaluate the number of brood present during treatment. A higher number of cell brood will mean you will have to let the strips remain for a longer time frame.

Remember to open the package strictly within the apiary and wear gloves while handling the product. These strips should never be used during honey flows but rather during low seasons. Ensure honey supers have been removed before treatment begins. The strips should also not exceed 6 to 8 weeks since the mites may develop resistance to the primary ingredients.

This product should never be ingested also since it can be harmful to humans. Some of the side effects of amitraz include; skin irritation, itching, vomiting, impaired consciousness, seizures, mydriasis, and digestive problems. Thymol can cause a burning sensation on the esophagus when ingested even though it is less toxic. It can also cause pain, hyperactivity, nausea, dizziness, pain in the abdomen, vomiting, coma, and cardiac or respiratory arrest.

Proper storage should be exercised while handling Amipol T strips. The product has a shelf life of 2 years but this will depend on how it is handled. Keep it in a dark and dry place without exposure to water or moisture. It should also be kept away from reach of children. Amitraz and thymol should be treated as any other chemical and as such should not be ingested or come into contact with skin or mouth.

Keep the product in a room with temperatures of between 0 to 30 degrees Celsius. Avoid exposing the product to open fire or heating devices also.

Varroa mites are a major honey bee pest. Recent research has established that the mites are far more abundant within the US than initially thought. It has also been linked to other serious viruses that affect the honey bee. Its main diet is the blood from developing larvae. Once a young bee emerges, the mite hops to the next larvae carrying along viruses. Mites are also passed from one bee to the other during foraging. They can jump from one bee to another and take along the viruses to other bee colonies. Good beekeeping management practices, when combined with the effective control measures and products, will help curtail the activities of the invasive varroa mites. The mites are manageable and the beekeeper can reduce its impact and also keep the mites in check.

Amipol T strips make it possible for beekeepers to treat and prevent varroa mites. The product comprises 20 and 50 strip packaged strips that have been soaked in amitraz and thymol. These two ingredients are effective in combating the varroa mites. The modes of operation of the two differ but ultimately lead to the death of the mites. It is advisable that the product is combined with other treatment methods such as biotechnical approaches so as to guarantee a more successful treatment of the apiaries. It is also crucial to schedule treatment at the right time and season.

Proper planning for treatment should be made and proper protective gear worn during the exercise. This product is a chemical and should be handled with care. Read and follow the guidelines on the label. You should also adhere to local regulations while handling the product. It is harmful if ingested and should therefore be kept in a safe storage area, preferably dry and dark away from reach of children.